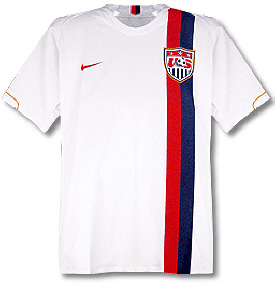 There aren’t many men who aren’t crazy about football (soccer) and there aren’t few women who are just as mad and cannot wait for World Cup 2010 to start. Every time when such major events take place, even those who don’t care much about football, turn themselves into fans (at least for a month).

Unless you’ve been living under a rock you surely know by now that the World Cup will take place in South Africa between June 11 and July 11, 2010. And if you plan to spend most of the time watching the matches with your friends at the local pub (or at the stadium), then you should definitely look into buying one of the World Cup kits 2010.

It’s not enough for fans to just appreciate the matches and friendly competition. They will root for a team. Even if their favorite time hasn’t qualified, they’ll gladly find a team to root for. Each time wants to win the trophy and all fans believe their favorite team is the best. Which makes for very interesting exchanges of friendly songs whether you are at the pub or on the stadium.

Rooting for the United States? Then get the USA World Cup Jersey and show it off in the local pub (double points if you already scored a plane ticket to South Africa along with tickets for the matches).

Europeans have quite a lot of options when it comes to finding a team to root for. Holland is definitely one of them – and one of those regarded as favorite to win the highly prized trophy – so don’t be shy to get the Holland World Cup kit and show your affection for the favorite team.

And you can surely take your World Cup gear for a test run by watching the friendly games your favorite team plays in order to be ready for the big event.