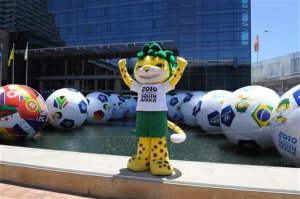 A week ago when two of my coworkers set off for South Africa to see the World Cup, I was simultaneously envious of and excited for them. Back when they first started organizing their trip, it was so far from the start of the tournament that it seemed too early. But that’s before I was paying as close attention to the football world as I am now – at that point, I didn’t know about the whole lottery for World Cup tickets that takes place years before the games begin.

So by the time it occurred to me that I’d like to go see the World Cup, too, it was, in some ways, too late. Yes, I could still find flights to South Africa, but those flights are almost always expensive even when there isn’t a massive sporting event going on, so any deals that used to exist were long gone by the time I starting looking. Similarly, although there were still hotels with vacancies in the various World Cup host cities, prices for rooms were also skyrocketing – and of course the best budget rooms in hotels close to the action were booked well in advance.

One of my colleagues has opted to make one of the host cities his homebase during his entire stay in South Africa, while the other will be roaming around the country a bit. And again, he arranged his transportation far enough in advance that he wouldn’t be stuck hitchhiking in South Africa to get from place to place. The bottom line is that although there will undoubtedly be some room for last-minute trip adjustments and excursions during the World Cup, it’s not the kind of thing you can effectively decide to do at the 11th hour – especially if you’re a budget traveler.

For this year, then, I’ll watch the games on TV (like most of the rest of the world) and enjoy the photos my coworkers are sending from South Africa – and I’ll be ready for the next World Cup in 2014, so at least if I miss that one, too, it won’t be because I didn’t know any better.