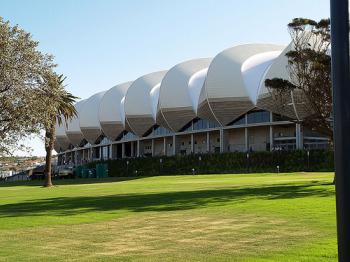 The Nelson Mandela Bay Stadium is the first football dedicated stadium in the city or surrounding areas of Port Elizabeth. It was newly built for the 2010 World Cup and was completed one year prior to the game. Prior to the construction of the Nelson Mandela Bay Stadium, international football matches were played at the EPRU – Eastern Province Rugby – stadium nearby.

The Nelson Mandela Bay Stadium will host eight matches, including the match for third place, and a quarter-final match during the World Cup. The playing field of the stadium is natural grass with the only the surrounding areas to be made of turf.

Capacity of the stadium is about 46,000 people, and it is located close to city (about 15 minutes drive from most hotels), two kilometers from the ocean, overlooking the North End Lake. The stadium was equipped with state of the art technology, including two large viewing screens, and the roof was specially designed to withstand the stress of Port Elizabeth’s high winds.