So I arrive at work on a Tuesday afternoon after a hectic weekend, where Billy’s opened on a rare Sunday afternoon to host a Red bull function which featured an awesome South African duo called Goldfish, to the news that i was going diving with sharks the following Saturday! What, where and how??? Apparently there was an incentive for us waitresses… whoever sold the most Vodka Red bulls would win a shark dive… oh cool! 🙂 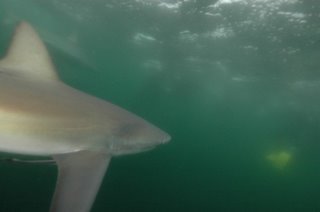 Saturday morning arrives and a group of us are off down the coast… the morning started a bit chilly and overcast! We arrive at Blue Wilderness, Rocky Bay and are quickly kitted up with wetsuit, flippers, goggle and snorkel. After a group shot and a short orientation from the lead diver, it as time to hit the beach. The rain started to come down at this point and the sea was looking very rough. We had a pretty rough but exciting 30 minutes boat ride to the dive site where the chum was dropped and within seconds we saw our first shark from the safety of the boat! While staring in disbelief into the open waters… we spotted a Southern Right Whale jumping in the distance! 🙂 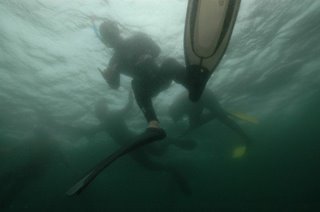 After about 20 minutes of chumming the water, we were surround by sharks, who were breaking the surface is a frantic race to get to the sardines… gulp!!! The lead diver then says, “get in”… what, in there??? I eventually pluck up all my courage and plunge into the depths of the Indian Ocean. Once i got the water out of my goggles and controlled my breathing i realised i was surrounded by sharks, everywhere i looked! The visibility was very poor and the sea very rough which made the experience even more intense. There were Black Tip sharks swimming around us, below us and through us… it was crazy awesome! 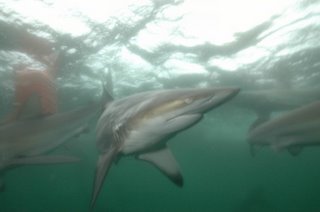 After being in the water for about 30 minutes, and floating on the rough surface i started to feel the horrible feeling of sea-sickness and nearly threw up in my snorkel… i an attempt to avoid that and attracting the sharks i made a beeline for the boat so i could throw up from the safety! I remained in the boat for the remainder of the dive unable to get the sickness under control, only to watch as one of our guys received medical attention on his shark bite… yes, shark bite! Well it was more a scratch… but inflicted by a shark no less, there goes the companies 10 year safety record!!! 🙂 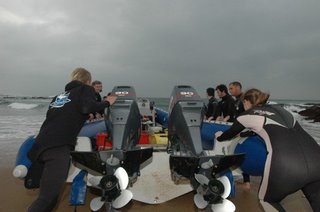 Thankfully, for my sake we headed home on what felt like the longest and roughest boat ride of my life… but fun never-the-less, i never shy away from a roller coaster ride! 🙂 myself and my stomach were very relieved to have my feet firmly planted on sand again. 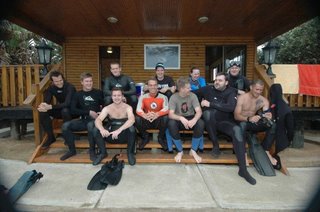 There are not many words that can describe an experience like that… something you always think is impossible until you’re actually there and realise how awesome it is! Yes, i would most definitely do it again… but with motion sickness pills in tow! 🙂