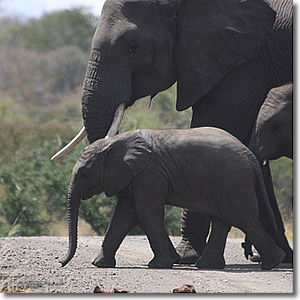 South Africa stands alone in Africa for many reasons. Its social vitality and general economic health are in stark contrast to many other states in region, some on her immediate borders. A traveler to South Africa can expect the odd synthesis of developed world infrastructurural and communication standards with a quintessence of wild Africa.

South Africa’s parks and wildlife structure is second to none in Africa, and what is also almost wholly unique is the fact that the national parks, natural preserves and conservancies of the country are supported directly by the local population. A significant sector of the South African public enjoy sufficient wealth and sophistication to appreciate wildlife as something more than just a food source, and indigenous forest and woodland as more than just firewood and charcoal.

Another factor that sets South Africa apart as a wildlife destination in Africa is the standards of local guiding. There is a vocational dimension to South African guiding that is sometimes plainly absent in other parts of Africa. In many places the concept of eco-tourism is not well understood, and lacking often is a genuine love of nature on the part of guides who slip into the bounty of tourism with little or no thought given to underlying concepts. In South Africa mandated licensing sets a high standard from the onset, after which competition within the industry ensures that young people entering the profession are exposed to a rigorous process of selection. This in turn places a clique of experts at the top end of the industry who are among the very best nature and field guides in the world.

The raw material for successful guiding is an excellent national parks and wildlife infrastructure, and South Africa has this in totality. No nation in Africa expends more public resource and spiritual commitment to conservation than South Africa. As a consequence it is the momentum of South African money, commitment and expertise that ensures the viability of such regional conservation programs as the Peace Parks Foundation, which in turn adds to the potential for survival of some of Africa’s most threatened species.

A safari tour in South Africa carries certain guarantees. Principal among these is the fact that standards of hosting, accommodation, guiding and the integrity of natural environments will be high. Also it can be taken for granted that peripheral organization, travel and general safety will be given the highest priority by commercial organizations locked into an intensely competitive industry. All of this is good. The primary concern of visitors to South Africa is crime, but what can also be taken for granted is that you will be escorted and protected at all times by professional staff no matter what activity or activities you choose. South Africa enjoys a safe, sophisticated and above all competently regulated travel environment. It is Africa for beginners, but also for veterans and return visitors who learned the first time round that South Africa sits at the apex of the African travel circuit!