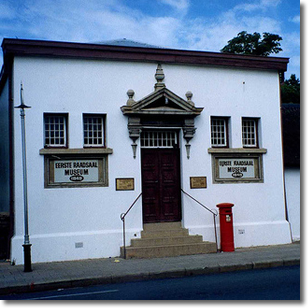 With a name like Bloemfontein, meaning in the Afrikaans Flower Spring, or Fountain of Flowers, it stands to reason that Bloemfontein would enjoy many aesthetic advantages, but this is not universally the case. In fact, apart from its historic relevance, Bloemfontein, or Bloem, is a little bit drab and parochial. The reference to flowers could come from many things, not least the Freestate landscape which, although also universally quite colorless, explodes into magnificent floral displays at certain times of the year, which makes up for the sun-baked stillness of the rest. It could also refer to the suburban garden aspect of the city which is actually quite a common fact of South African cities, or the more prosaic origin of a draft oxen called Bloem belonging to an early pioneer.

Bloemfontein is the capital of the Orange Freestate, and traditionally the heartland of rural Afrikaans government, but nowadays is the national judicial capital of an independent country, but all in all something of a conservative settlement with a few residual stains of the die-hard apartheid mindset. Like Pretoria this is a city that leans heavily on history, and hosts a good number of offbeat museums – the Choet Visser Rugby Museum is one, and the Fire Station Museum another – but besides these look out for the more orthodox National Museum, Anglo/Boer War Museum, Oliewenhuis Art Museum, South African Armour Museum and the Queens Fort Military Museum.

Also to be found are a number of botanical gardens and nature reserves, in particular the National Botanical Gardens and the Franklin Nature Reserve, an 192 hectare reserve in the city center with a surprising selection of big game wildlife.

Don’t look for a rip roaring urban scene in Bloemfontein, although as a university town there is evidence here and there of a youth culture, with a reasonable selection of restaurants and pubs for those weary of gardens, history tours and wildlife.

One of Bloemfontein’s most notable claims to fame is that is was the birthplace of renown allegorist and author J.J.R. Tolkien

The city is situated on the southern edge of the South African highveld, with the vast Karoo to the south, and a altitude of around 1500ft in and around the city. Being so far inland it experiences the continental effect, with war, wet summers (November – February) and winters (June – August) that are clean, dry and pleasant, with the potential for very cold nights. On the whole the region enjoys a very benign climate, with temperatures and humidity never reaching uncomfortable proportions, and despite an occasional frost, temperatures never plunging lower than is enjoyable.

Between July and Sept the nearby Namaqualand region experiences the legendary wild flower displays, which although by no means as dramatic in the Freestate, is still a lovely time to visit. Besides that there is no particular time that is popular or recommended for a visit to Bloemfontein, although winter is generally regarded in the Freestate and being the most beautiful time of the year.

Crime: Bloemfontein is not as dangerous as most of the big cities of South Africa, and in fact a certain amount of pride is taken in the fact that downtown Bloemfontein is safe to walk through during the day, but the city it is still in a high crime region and no chances at any time should be taken in and around the city. The dangers of street crime and muggings are as high here as anywhere else in South Africa. Don’t be fooled by the easygoing atmosphere. Keep your wits about you and remember that South Africa is one of the most dangerous countries in the world. There are certain areas in Bloemfontein that are more dangerous than others, although nowhere is particularly safe on the streets after dark, so seek and follow local advice on the matter of crime and general safety wherever and with whomever you go.

Seek safety advice from you hospitality establishment wherever you are

Don’t leave anything of value in your car overnight

Incidences of car hijackings in South Africa are high Always be aware of your surroundings, particularly at night

Don’t stop on any of the freeways for more than a few minutes, and in the instance of a breakdown, call for help

In most of South Africa tropical diseases are rare. While Bloemfontein enjoys a very mild, sub-tropical climate, incidences of malaria are rare, although are occaisionally of mosquitoes about, and repellent is a must. As a matter of policy a course of anti-malarial drugs are advisable, particularly if you intend traveling further north up the coast.

Travel Doctor clinics are to be found in all the major centers where you can get health advice on malaria, yellow-fever, AIDS and any other tropical diseases, and acquire all the vaccinations and prophylactics necessary for your extended journey.