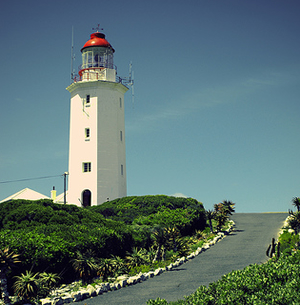 From Cape Town to the Wild Coast, the Cape Coast is punctuated by idyllic towns and villages, each offering a variation on Cape hospitality, and each with a peculiar angle on marine sports or venture activity. None, however, can stake a claim to adrenalin fame quite like Gansbaai, a tiny fishing hamlet situated about 2 hours drive southeast of Cape Town, famous for its shark alley, and its dense population of Great White Sharks.

Gansbaai is one of the world’ top commercial cage diving destinations. The activity is focused on Dyer Island, and in particular a narrow channel between this and Geyser rock known as Shark Alley. Dyer island supports a large population of Cape Fur Seals which in trun attract large numbers of these deadly marine predators.

There are a handful of different operators offering commercial shark diving charters, but the opportunities do not end there. Whale watching is also very fruitful along this particular stretch of coast, and thanks to the adrenalin angle there is a small but vibrant backpackers culture that is very well linked to the Cape Town and more general South African backpackers lodge fraternity.

An annual Great White Shark Festival is staged in the town in October, which, if anyone had failed to notice the fact, celebrates and draws attention to the iconic attraction of the region…the Great White Sharks.

There is much more to the area than this, though, and the usual fare of great beaches, great food and great wine are all standards of the East Coast and the Garden Route, and if you are in the market for some hard core adventure, or you are simply a lover of great nature, check out Gansbaai as you make your way up or down the coast.