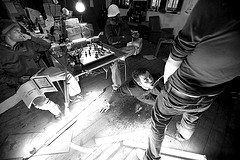 In an action rich in irony this week a certain Mr Black successfully brought legal action against the notorious ‘whites only’ South African holiday resort, Broederstroom Vakansie-Oord, situated near the Hartebeespoorte Dam in Gauteng Province. In common with a handful of other facilities, notably the Orange Freestate, an element of white society in South Africa has, and continues to attempt to retain what racial exclusivity the liberal constitution of South Africa will allow. On 5 March this year Mr Black and his wife, who are white but who have two adopted black children, were evicted from the resort thanks to the mixed race status of their family. This enraged Mr. Black, causing him, with some justification, to lodge a complaint against Broederstroom with the South African Human Rights Commission, which in turn initiated proceedings in the Equality Court in terms of the Promotion of Equality and Prevention of Unfair Discrimination Act of 2000.

The matter was settled out of court, but this is not the first time that the proprietor of Broederstroom Vakansie-Oord, a certain Mr H Pretorius, has pitched this particular race policy regarding public access to his property. Earlier in the year he disallowed the presence of world famous South African filmmaker Anand Singh (a gentleman of east Indian origin) from joining his crew filming Leon Shuster’s follow up Mr Bones 2 at Broederstroom. Pretorius was in fact out on bail at that time on a charge of attempted murder in an incident involving himself, a rifle, several shots and a black man walking through his property.

Meanwhile investigators from tourism board responding to the general hubris were also denied access to the Broederstroom Vakansie-Oord for the same reasons, with Pretorius fulminating about them, the government, the general state of South Africa and the merits of the President, threatening all the while that there would be war if entry on to his property was enforced.

So many questions arise from these incidences that one hardly knows where to begin, but the main question must certainly be why a black man, and even more a man named Black with two non-white children, would even want to venture into a holiday resort with a name like Broederstroom. Certainly one imagines that any person intending to visit a public establishment for a day or two would research somewhat the tenor of it beforehand, and thus it is hard to imagine how all the blacks involved, the white sangoma and the Indian, did not know in advance what to expect from Mr Pretorius and his wife.

Racism, of course, is not a one sided phenomenon. Quite recently an incident involving a white journalist being barred from covering the ex deputy president and current president of the ANC Jacob Zuma’s address to the Forum For Black Journalists highlighted the relative acceptability of black on white racism, although in fairness the matter stirred up a very rich debate and was taken by lying down no-one.

Should there be an exclusive, whites only vacation facility, or indeed a blacks only news conference, held anywhere in the world, let alone in a country with such thinly healed race wounds as South Africa? Certainly not, but if readers happen to want to visit Africa and not have to share a facility with a black man, then rather than spend three weeks as guests of the Pretorius family, go to Norway instead.

Meanwhile the matter of race in South Africa is being carefully examined in a photographic exhibition currently being held at the Blank Projects Gallery in Cape Town that purports to explore the invisibility of ‘white’. In essence this means that being white is a state of racial non-existence, quite, one supposes, as being male is a state of gender non existence. This is by virtue of the fact that the struggle for gender equality has never been part of the male identity, just as the struggle for racial equality has never really been part of the white identity. Being white is just, well, being white.

Ons Skrik Vir Niks, or We Are Afraid of Nothing, opened on 6 of April and runs to 9 May, and features provocative work from a number of artists, most of whom are white, and all display a preoccupation with race that barely features the black perspective so often associated with race commentary. More than anything, this, somewhat like the overwhelmingly white lineup of the Splashy Fen music festival held in the Drakensberg over Easter, is an indication of just how mixed the race landscape of South Africa is, and moreover how diverse and sophisticated is the general blueprint of the nation’s arts fraternity. It is likely that one will walk away more impressed by the fact that Ons Skrik Vir Niks is served up as artistic fare for the discerning consumer at all than the merits of the show itself.

This is part of what makes South Africa so interesting, and separates it from the canned experiences of game parks and curio markets that can make up travel in so much of Africa. The Anlgosphere has in common a certain Anglo/Saxon identity, mixed up according to their particular colonial experience, but nonetheless identifiable as all being trees of the same root. South Africa, however, has an emerging generation of positively charged race electrons who do not wish to take their cue from the xenophobic and backward looking north, but want to be part of the progressive, Afro conscious mix of social and political heat that is contemporary South Africa. This is not to deny the existence of race diversity, or individual characteristics of race, but to plunge into them, to celebrate and explore them, and to be able to speak and act freely in a race orientated society without platitudes and the customary and determined blindness of the global race entente.

Men like H. Pretorius are an anachronism, and with him is dying the entrenched suspicion that still infects the old guard of all races in South Africa. Such incidences as the Broederstroom Vakansie-Oord episode, or the banning of white journalists from a black journalist forum, are slowly bleeding out of South African society, and far from a lily white anaemia, the result is a richer, darker blood that owes it’s origins to almost a half millennium of diverse racial contact, and long may it remain so.

Gallery hours: Wednesdays from 4pm to 7pm or by appointment