The Bo-Kaap: A Show Piece of Cape Town Culture 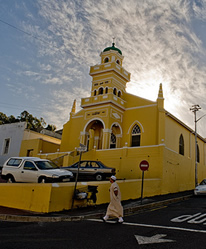 One of the most picturesque quarters of a beautiful city is Cape Town’s Bo-Kaap. Once known as the Malay Quarter, the area was in fact the home of a predominately Muslim population drawn from many quarters of the eastern world, and imported to The Cape predominately as slaves or bonded workers during the 16th and 17th centuries.

Most of the original inhabitants of the Bo-Kaap derived from areas of Dutch overseas influence, with the majority being Indian, but with influences also from Malaysia, Indonesia, Madagascar – itself populated largely by migrant and bonded groups from the Indian Ocean trading axis – Ceylon, Indo-China and Japan. These, in combination with the original Dutch settlers, merged and melded and in due course laid the foundations of the unique Cape/Dutch, or Cape/Malay culture that has over the years tended to be most obviously manifest in architecture and cuisine.

It is both of these that the remnant suburb of the Bo-Kaap now showcases as a small part of the diversity of Cape Town culture. A stroll up the narrow cobble streets will first reveal a bounty of rich aromas emanating from the local spice shop, after which you will no doubt be amazed at the old world architecture and the clipped and colorful aspect of the neighborhood. There are some ten mosques within the immediate area of the Bo-Kaap, as well as three Karamats, or traditional Muslim burial sites.

The vivid history of the Bo-Kaap is captured and displayed in a dedicated cultural museum within the district itself. The Bo-Kaap is easily accessible from the Cape Town City Bowl, which is the central business district of the city, and is just a few minutes walk from De Waterkant and the Victoria & Alfred Waterfront.

A new arrival in the district is the recently opened Rose Street 28 Guest House that offers very authentic en-suite accommodation in the distinct style of the Bo-Kaap. Situated, as the name implies, on Rose Street in the center of the Bo-Kaap, Rose Street 28 is something of a tourist attraction itself, and is not only convenient for taking in the sights of this little neighborhood, but is also ideally situated for access to downtown Cape Town Itself. Owner Bruce is helpful and friendly, and will arrange airport transfers, car rentals and provide restaurant recommendations and assistance with tour bookings. The lodge offers free wi-fi, a hearty breakfast, and comfortable rooms with AC, TVs, and safes.