Stargazing In The Cederberg 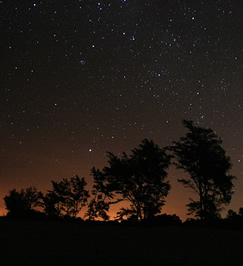 In a country with more angles on tourism than on a cut diamond, I was interested to discover the existence in the South African Cederberg of a private observatory that offers the opportunity for stargazer and astro-enthusiasts to indulge in some southern hemisphere observations. The Cederberg Astronomical Observatory was established in 1980 by British astronomer Peter Mack who was at that time employed by the Astronomical Society Of South Africa. Mack visited the Cederberg and recognised immediately the potential in the region for a local observatory.

Since then the site has been developed and is now run by a consortium of partners with headquarters based in Cape Town. Any of these good people can be contacted via the web page, and are available for consultation on matters of astronomy, or for advice on any phenomenon or particular events being held at the observatory.

The Cederberg Region is situated north of Cape Town in area of Clanwilliam. It is an arid region that is part of the Greater Karoo/Kalahari fringe biome, and is a beautiful but rather little known hiking destination in the Western Cape. Anyone who has ever hiked in the Cederberg, apart from being blown away by the rugged and diverse scenery, will also have noticed the complete lack of light pollution, and the magnificent, sweeping southern hemisphere starscapes that are comparable to nothing else in the universe.

The Cederberg itself is a must see destination for any visitor to South Africa, even if it is just a matter of road touring, but if you get a chance, make arrangements to visit the Cederberg Astronomical Observatory. The facility is staffed on any evening other than during a full moon when there is no point in bothering. There are several telescopes available as well as a Meade DSI CCD camera for detailed capture of deep sky objects.

The facility is easy to find, and is situated just outside Dwarsrivier about 200km outside Cape Town. There are fairly detailed directions available on their website, but a word of advice would be to contact the observatory or any of the partners beforehand to confirm your visit. There are basic accommodation and kitchen facilities on site, but a better option would be to check into a local guest house or lodge, of which there are many scattered around. Road conditions in the Cederberg conform to the general high standards of South African communications, so you will have no problem finding it.

Check out the website of the South African Astronomical Observatory for other useful links and contacts in the field of astronomy in South Africa.