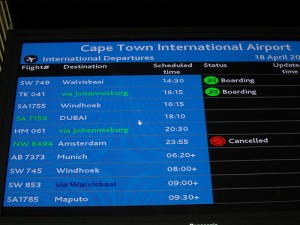 When it comes to finding cheap airfare to Cape Town, things tend to get a bit more complicated. But that doesn’t mean you won’t be able to find a bargain, it just means you’ll have to try harder.

Cape Town International Airport (CPT) is located 20 km from the city center and is the country’s second busiest airport. It’s not a hub for any airline, but it does receive both international and domestic flights. There are flight from London, Paris and Amsterdam. There aren’t any direct flights from North America.

Make sure to plan your flight outside the high season (which runs between October and March). Although the weather is colder and wet, it won’t stop you from being able to visit the sights. And it will surely help saving on airfare. Schedule your plan mid-week in order to avoid the peak weekend traffic and the business travelers flying on Mondays.