South Africa’s Beaches: When to Visit 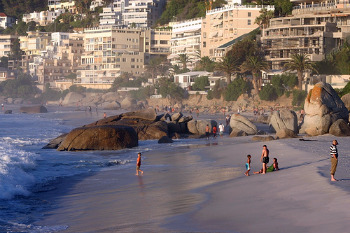 While all eyes were on South Africa for the World Cup over the last few months, seeing soccer fans in the various stadiums all bundled up against the cold was a constant reminder that the months of June, July, and August aren’t exactly warm in South Africa. It’s easy to forget that “summer” isn’t a specific few months, but a season – and one that’s going to cover different months depending on which hemisphere you’re in.

The BootsnAll staff members who went to South Africa for the World Cup were based in Durban, which did enjoy mostly mild weather throughout the tournament. But although the beaches of Durban regularly had people on them – watching games or playing a bit of soccer themselves – it was by no means beach season in South Africa. The beautiful beaches in the country are extremely popular, however, at another time of year.

Unless you’ve grown up in an area where seasons don’t really happen, taking a long-term trip that chases the sun is a very common goal. After all, as it’s always beach season somewhere and you’re already planning a long trip, there’s no reason not to combine your love of travel with your love of the sun. All you need to do is use this article with a calendar of amazing beaches and when they’re at their best as you’re creating your route on this round the world trip planner and voila – you’ve got the ideal sun-lover’s itinerary.

As for South Africa, it’s Clifton Beach in Cape Town that appears on the beach calendar, and of course it’s not June, July, or August that’s listed as the best time to visit. Cape Town’s beaches (and, really, any of the beaches in South Africa) are at their best in October. Luckily, that’s also something of a shoulder season, which means the hotels in Cape Town aren’t likely to be as expensive as they might be in the peak summer months.