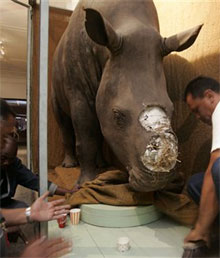 Crime in South Africa merged with conservation this week, which gave a fair indication of the successes of the later at the expense of the former. There was time during the 1980s and 1990s, in fact during the hot war over the CITES ground rules for the exploitation of wild products such as elephant tusk and rhino horn, that the trade in those two commodities stood at a premium. These events, and the general mood of the period, served to highlight, among other things, the Asian male predilection for rhino horn as an aphrodisiac. The association of ideas behind this being obvious, and similar, one supposes, to the advantages gained from eating the eyes of an eagle, the heart of a lion or the balls of a bull etc

Thieves this weekend targeted the Iziko South African Museum in Cape Town and smashed their way into a taxidermy display, making off with two ‘priceless’ horns from a mounted white rhino that had been on display in the gallery since the 19th century. This particular specimen had not been taken off the floor, as many others have as a consequence of earlier attempts to smash and grab their accoutrements, since it had particular historical significance, and moreover visiting school parties could hardly be roundly educated in ecology without the inclusion of a rhino.

This assault has indeed followed a series of similar attempts against museums and displays around the country, indicating that, although the demand for rhino horn is still strong, supply has become limited, and this not simply because of the decline of the species. The white rhino has recently been wrenched back from the jaws of extinction, and is now estimated to have a population of some 11 670 in the wild. For this it is mainly the conventions of CITES and the high standards of South African wildlife management that can be thanked.

Other African countries are not so conscientious in this matter. In November 2007, as the political crisis in Zimbabwe continued to claim victims, several men dressed in the standard issue Zimbabwe military camouflage, and armed similarly with standard issue AK 47s, drove into the yard of Imire Game Farm situated a short distance from the capital, and forced staff at gunpoint to lead them to pens that contained several black rhino that were part of an intensive conservation program. Three of the animals were shot, and their horns removed, before the killers left in good order, and in a manner that would have pleased their senior commander who no doubt shared also of the fruits of the operation.

So considering that the population of southern white rhino is increasing under the protection mainly of South African, Botswanan and Namibian conservation agencies, and that of the black rhino likewise, and that thieves and poachers, with the vast tracts of wild Africa from which to pick their fruits, have been forced into raiding museums for scarce product, this is an excellent indictment of the South African conservation fraternity’s successes in what throughout most of African has proven to be something of an unequal struggle.

The conclusion to this story as reavealed in the press is that the offended rhino was soon back on display, with museum officals warning those intending to consume the ground up horn for it’s purported value that the horn was preserved in DDT and arsenic. Good luck!