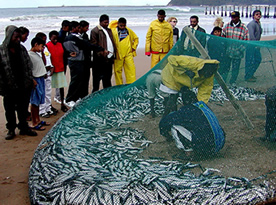 It’s a real gamble setting a festival date to celebrate the expected arrival of a natural phenomenon, in this case the greatest shoal of fish on earth, many months in advance of their arrival. And even more so when this incredible mass of millions of sardines failed even to arrive at all in 2007 and 2006. So it was with great relief to the KwaZulu-Natal tourism authorities when the first shoals were spotted off the South Coast a day ahead of the June 13 launch of this increasingly popular Sardine Festival.

This migratory phenomenon is set in motion when millions and millions of small fish, a pilchard-type species, embark on a northwards journey along the country’s coast from their home base in the cold waters of the south-eastern Cape to as far north as the province’s capital of Durban, before peeling off seawards and into deeper waters. Why they travel this route still unclear, except probably that new territory is created as the cold winter waters from the Arctic pushes upwards into the warmer Indian Ocean waters.

For locals living along the 120-kilometer stretch of coastline from the province’s gateway town of Port Edward in the south to Durban, news of the arrival creates nothing less than frenzied excitement. Where these fish actually touch the coastline is always a guessing game, but word soon spreads as to where the “Sards” have landed, and seine netters and bucket wielding locals dash in excited anticipation of a catch.

The sightings so far this year, while still only the fist small pockets of pilot shoals, are according to the experts preceding what is expected to be the largest shoal seen since the last great Sardine Run of 2002. Your writer, resident in the holiday hamlet of Ramsgate, witnessed one of the fist catches of the season at the local Ski Boat Bay last Thursday. As a first time experience of the phenomenon, it was a thrilling site.

Several small fishing boats with seine nets dashed off the beach, headed out a few hundred meters, completed a loop formation, then beached and started dragging their bulging nets to shore. Locals with buckets and other receptacles gathered around the fringes to collect the spillage. The first crates, weighing between 25-30 kilograms, were already being traded on the beach for R300 (approx US $40), although prices will fall sharply as supply increases with further arrivals.

What kick starts this little fish’s migration (more specifically the pilchard Sardinops sagax ) is a sudden drop in Indian Ocean water temperatures to below 19 degrees (usually from June) as the cold Benguela Current pushes northwards into the advancing, warmer Mozambican current. According to scientists though, it is only a small fraction of the main body which leave their feeding and spawning grounds for newer shores.

During their journey the shoals are viciously predated upon, first from the air by thousands of dive bombing Cape Gannets as well as cormorants, gulls and other species, and then by an equal number of marine predators including sharks, game fish and thousands of bottle-nosed dolphins. During this feeding frenzy the shoals are often driven close to shore where the narrow continental shelf delivers these hapless creatures into the nets and bucks of nature’s ultimate predator.

By the time the shoal arrives at the warmer waters of Durban it has been horribly depleted during its 200 kilometer long journey. It is here that they turns seawards and essentially disappear into deeper waters. Where to and why is not known, although interestingly a couple of months later a reverse shoal is sometimes spotted swimming southwards, although the size of those sardines are decidedly larger. Whether this is the same shoal is still unclear.

The Sardine Festival is organized by provincial tourism body KZN Tourism, the Ugu District Municipality and the Natal Sharks Board, runs until the middle weekend in July and showcases this wonderful stretch of coastline south of Durban through a variety of marine, beach, cultural and musical activities.

For more information about the Sardine Festival, or fo rmore regular daily updates on the location of the shoals call the Sharks Board on +27 082 284 9495.