South Africa kicked off the Rugby world cup yesterday with a splendiferous kicking of Samoa’s derrierre. (59-7)

Percy Montgomery and Brian Habana were the stars of the show, with Percy adding 2 tries and a total of 29 points and Habana’s ridiculous speed contributing 4 tries. 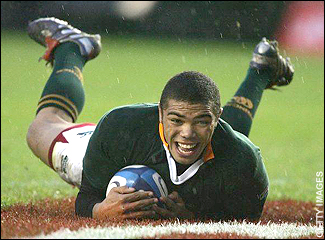 South Africa’s concern against playing the Samoans was trying to avoid injury from the leather necked Polynesians, this fear was realised as Jean de Villiers may have to sit out the rest of the tournament due to an arm injury.

Although the scoreline suggests a walkover the players would beg to differ. Physically the Samoans punished the boks, who through fantastic ball handling and team work set up try after try.

Hopefully this is a start of a great world cup! Amabokoboko!