While Cape Town has seen massive up scale development in recent years, certain areas have been noticeably neglected, and none more so than Adderley street and the Cape Town train station.

Adderley street used to be the jewel of Cape Town, with all the major department stores and “The Golden Acre” shopping centre, which housed the finest retailers in the CBD.

Right now Adderley street is a string of low end takeaways and loan shark shops and The Golden Acre has oxidised into an extension of the train terminus. This is partly due to the emergence of the V&A waterfront and other 1st world shopping areas. 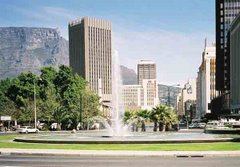 Cape Town station has the reputation of being a “hotbed of crime”, which is a terrible shame. It is a stately old building where I caught the train to school alone, at the tender age of 8. The roof of the station seems to bear the brunt of the crime, and the side facing Adderley street seems to be bustling with curio sellers and tourists, which is a good sign.

opposite the Train station on the Strand street side (strand means beach, and this was where the water came to before the reclamation of land to build the docks!) is the Grand Parade, which is not very grand any more and grilled chickens are all you are likely to see parading.

Still, things are afoot to transform this area into a “Green Zone” and add a bit of colour and life to the tarmac. I am all for it, but loathe things being classified as “Zone’s” it feels too 1984. 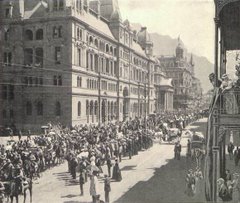 This urban decay may soon be on the turnaround as three big players have cottoned on to the trend of young people living/working and shopping in the CBD. Plans are in the works to create sparkling new retail, office and residential developments in the heart of town, and even rumour of 2 Billion Rand ($0.20c) skyscrapers. This is great news and will breath some much needed life into that area of town.

The foreshore area which was always a rather dead strip of quiet at the end of town, is slowly kicking into gear thanks in part to the CTICC (Cape Town International Convention Centre) and some new swanky developments going up at breakneck speed. Let’s not run out of cement again please.