Today marks Madiba’s 89th birthday and starts a week of festivities, including the soccer match dubbed “90 minutes for Mandela” featuring greats Pele and Samuel Eto’o and the launch of a humanitarian campaign. 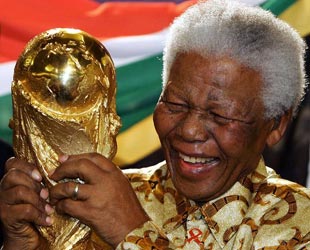 “During the dark years of our incarceration, the association drew together all the prisoners on the island around the beautiful game of soccer.

“In this way it helped uphold the values of tolerance, of inclusiveness and reconciliation, and of non-racialism and peace that are still dear to all of us today,” he added.