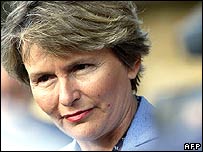 My heroine, Mayor Helen (of Troy) God-Zille, has been arrested this morning during a march against gangsterism and drugs.
“The question that arises is this: everyone knows who the drug dealers in Mitchell’s Plain are, and where they ply their trade why are they not arrested?” said the Zillmonster.

The childlike empress (Helen Zille) apparently knocked on the door of a suspected (known) drug dealer, which was “out of the spectrum of the march”. 8 persons including the honourable Zille were arrested for an illegal gathering outside the Mitchell Plein police station. “The last time I witnessed people treated in this way was during anti-apartheid protests. We now have a constitution and a Bill of Rights.”- Zillina.

“It is time the South African Police Services started making life difficult for criminals and not for people peacefully exercising their legal rights.”- Zillette

Leonard Ramatlakane of the ANC accused Zille of embracing people who have strong links to vigilantism in the Western Cape. What a load of tosh!

Mitchells Plein is in the heart of the notorious “Cape Flats” area where drugs and gang violence are a scourge.