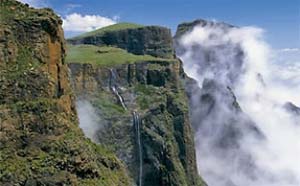 As with the Royal Natal National Park, the area of Cathedral Peak is dominated by the Drakensberg escarpment, and similarly offers the two distinct walking zones of hill country above, and ridges and gullies below. Cathedral Peak is also the first realistic point of descent from the escarpment after Mont aux Sources, for although there are some 6 or 7 passes that leak off the face in between, none will deposit you anywhere near a hotel or KNZ Wildlife facility. Thanks also to the fact that the Cathedral Peak Reserve and its surrounds are well serviced by accommodation options and other general facilities it is one of the most popular hiking destinations in the Berg. However, although there are a variety of easy and pleasant trail options available to service the regular flow of day trippers, there are also some very cheeky and little used byways that might take you by surprise, and will severely challenge your leg muscles while leading you into some of the most majestic and beautiful scenery in the entire range.

The area of Cathedral Peak (32 000 hectares) is essentially three separate conservation areas: Mlambonja Wilderness Area to the north, Mdedelelo Wilderness Area to the south, and Cathedral Peak State Forest in between. Notable here is the potential for those without the physical means or inclination to walk, to gain close vehicular access to the escarpment. Some 10,5 km long, and climbing some 500m in altitude, Mike’s Pass was named after Mike de Villiers, forestry research officer circa 1949, who is credited with the establishment of the local Cathedral Peak Research Station, and the eventual construction of this road. The road itself begins at the main KNZ wildlife office, and at its conclusion is found the trail head for a series of peaks known as the Organ Pipes, and to the escarpment itself. Also accessible from this point is the renowned Didima Gorge with its extraordinary proliferation of some 3900 individual examples of San rock and cave art.

Dominating the scenery of this area is of course the Cathedral Range, also known as the Ridge of Horns. This is a 4km long extension protruding at right angles from the face of the escarpment, and including some of the most spectacular peaks in South Africa. These are Cathedral Peak (3004m), the Bell (2930m), the Outer Horn (3005m), the Inner Horn, (3005m) and the Chessmen. All these are situated more or less in the top northern corner of the Mlambonja Wilderness Area. Among these are some extremely challenging technical climbs. Two other notable free standing peaks nearby include the Column (2926m) and the Pyramid (2914m), which are both situated a few km south along the escarpment. 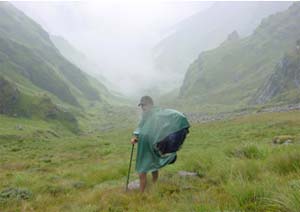 One of the most popular outfield hikes in this part of the range is an ascent of Cathedral Peak itself. This is approximately an 8 or 9 nine hour round trip from the trail head situated near Cathedral Peak Hotel, and some 3km from the main KNZ Wildlife Office. It is a tough walk involving a C grade scramble at the final section, and although hardly a technical climb, should not be attempted by any absolute novices. The reward at the summit, however, is a magnificent view of the northern Drakensberg from Mont aux Sources to Champagne Castle, not to mention the striking proximity of the partner peaks of the Cathedral Range itself.

Access to the escarpment is best achieved via the Organ Pipes and Organ Pipe Pass. There are no easy ways to get from the foot of the escarpment to the top, however, and only degrees of difficulty are usually considered. For example, during the 7km of foot trail from the head of Mike’s Pass you will gain some 900m in altitude before you broach the escarpment. The reward for this effort is the route itself, which passes through a sequence of fluted spires and buttresses known in the Zulu Qolo la MaSojda, or the Ridge of Soldiers. There are several other access points to the escarpment with the most difficult perhaps being Xeni Pass in the Mlambonja Wilderness Area.

Besides these, there is a wide and varied choice of walks, hikes and strolls in the area, and some 130km of trails to choose from. The landscape is characterized by grassland with forest patches, and of course the dramatic face of the escarpment itself, where once again the pursuits of bird watching and amateur botanics are well rewarded. Situated in the heart of the reserve is the Cathedral Peak Hotel, which in theory is off limits to hikers who do not have a reservation, but in practice the staff will rarely refuse you a beer or a good breakfast, or both, if you happen to stumble in off the escarpment after a week in the high country. The Hotel itself is a very elegant establishment in the best tradition of South African hospitality, from which detailed information on all aspects of the park are available, as well as options for guided walks or either four wheeled or four hooved variants. Resort and spa facilities are also offered for those with a total disinclination to actually touch the wild, and river trout fishing as an option for those who do. 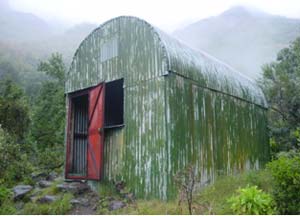 Other interactive accommodation options include the KNZ Wildlife Didima Resort and San Art Center which is centrally located within the wilderness area and themed around the history of the San people. Once again South African standards apply here, and the facility is both efficiently run and sensitively conceived and applied. It is a luxury facility offering chalet type accommodation which can sleep as many as 140 guests at any time. Guided walks are again available, with local guides particularly attuned to the many fine examples of San Rock art available.

For outfield hikers or budget travelers there are a number of caves, huts and campsites scattered across the escarpment face and approaches that offer very welcome shelter in the inclement climate of the berg. Detailed maps to these, and to the area generally, are available at the KNZ Wildlife office, and usually reliable information too.

How to Get There

Access to the park is from Bergville or Winterton via the R616 or R600 off the N3 between Ladysmith and Estcourt.

Accommodation in the surrounding area is ubiquitous and includes every style and standard from backpackers to five star, to the: ‘hipcats, jetlags, gourmets, dipsomaniacs, the bossa nova and the boogie woogie’…you guess where!