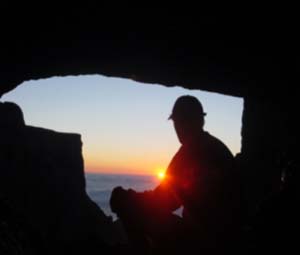 The Drakensberg Mountains, or uKhahlamba (Barrier or Spears) in Zulu, is a place of profound practical and symbolic importance to South Africa. It is the central watershed that gives rise to the three iconic rivers of the Vaal, the Tugela and the Orange; it is the physical landmark that split the Bantu Migration into the Nguni and Basuto subgroups; and it was the parameter of settlement between Briton an Boer during the tense years leading up to the great Anglo/Boer War. Besides that it was the last fortress of the San, or Bushman people in the central region, who were ultimately pushed to the fringes of viable existence both by white and black expansion, and who left in their wake a sweeping legacy of cave art, not just in the Drakensberg, but throughout the region. Currently the highlands make up most of the independent state of Lesotho, with just the leading approaches of the escarpment falling into the territory of the South African provinces of Mpumalanga and Kwazulu/Natal.

From a travelers point of view the Drakensberg provide something of a break from the routine of lowland game parks and wildlife preserves that tend to define and make up so much of an average southern African journey. Those parts of the escarpment that permit public access are defined largely by the escarpment, and are subdivided into a series of national parks and areas of forestry or state land. Above the escarpment lies the high and open hill country of Lesotho that is public land only inasmuch as it is communal to the pastoralists and herdsmen who husband their animals there. Technically, broaching the escarpment and walking in this area represents and illegal boundary crossing, and although the national parks personnel will let this fact be known, the provision is rarely enforced, and free movement within a reasonable distance from the escarpment is permitted.

The northernmost access to the mountains is via the Royal Natal National Park that has it’s flagship feature the Amphitheater, a hugely impressive cliff face structure, approximately 5 km in length, and averaging a 1220m elevation along its entire length. The park itself is easily accessible off the main N3 toll road between Gauteng and Durban, and leading off the R615 to Winteron and Bergville. Entry is by permit only, and these are obtainable at the KNZ Wildlife Office and Visitors Center at the entrance to the park (R25 Adult & R15 children per day). All the various offices and visitors centers at the Royal Natal have a pleasantly first world aspect, which alternately tends to dilute the sense of a true wilderness venue, but also offers the security of knowing that any trouble or emergency will likely be dealt with in a manner both prompt and efficient.

Thereafter there are two ways to approach the mountain. The first is to opt for a light amble around the park itself, which is not huge, at about 8000 hectares, and offers some 25 different walking trails at a level of difficulty ranging from moderate to light. Within the park itself there is a hutted camp, two campsites and a handful of cave shelters. Horse riding is offered at the Rugged Glen stables which is an excellent way to see the park, and of course the usual attractions of bird watching and amateur botanics are available on foot, on the hoof or from the comfort of a motor vehicle. 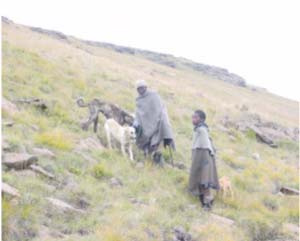 The most popular infield trail runs alongside the Tugela Gorge and offers spectacular views of the famed Tugela Falls, the second highest in the world, that tumble 947m in five leaps, with the highest single drop being of 411m. The topographical structure of the park is broadly that of drainage gullies and gorges leading off the face of the Amphitheater or the foothills, and most of these are served by well maintained and contoured trails that either cross or lead up the watercourses. There are many of these, and each as beautiful as the last, and on a clear day each offers a different perspective of the defining face of the Amphitheater itself.

The second alternative is to use the Royal Natal as a jump off point to access the highest local peak of Mont- Aux-Sources (3282m), and the lip of the towering escarpment. From that point the southerly drift of the Lesotho highlands offer an extraordinary opportunity for hill walking, with the diminishing hill country to the right and the dizzy drop of the escarpment to the left.

To this there is both an easy and a hard approach. The easy is to drive to the Sentinel car park where fenced overnight parking is available. Access to this is via a reasonable gravel road that leads off the N5 north of Harrismith, and the R712. From there a cliff side trail leads up to two precipitous chain ladders that carry the hiker over the 30m or so of leading cliff face. This same point is also accessible on foot through the National Park, and is a matter of setting off from the main car park and moving up through the ‘Crack’, which is not easy, but which delivers one to a high valley that then affords perhaps one of the most pleasant hikes in the park. A series of lovely trails drift over dappled grassland and sweet water streams to the Witsieshoek Mountain Resort, and then on to the Sentinel Car Park.

From there the options of the Drakensberg open out, with perhaps the premier undertaking being the Grand Traverse, which is a ridge walk essentially from the Royal Natal National Park all the way south, some 200 km, to the southernmost point of Bushman’s Nek. This, a significant endeavor, and not one to be taken lightly, will unfold in it’s patchwork of different legs as I explore the Drakensberg Mountains in more depth. It can also be done piecemeal with reasonably viable exits and accesses scattered along the length of the escarpment.

However, what needs most to be borne in mind, and this is true not only for the Drakensberg, but for all of South Africa, is that this is a nation where violent crime is more than a social disease, it is a low level civil war. Therefore it ought always to be remembered that one is alone in the high country, and surrounded by Lesotho herdsmen, who although not reputed to be either violent or criminal in nature, are none the less poor, and not at all unaware of how not-poor you look with your alpine boots, $200 backpack, and fanny pack probably stuffed with greenbacks. Violent incidences in the Drakensberg are rare, but they happen, and simple precautions need to be taken. Do not attempt any of the big hikes alone. Do not pitch your tent out in the open where it is visible for miles, and do not site your camp too close to any of the herding settlements or kraals that pepper the high country. Most of all, keep your valuables to a minimum, keep your wits about you, and enjoy the wonderful Drakensberg Mountains.

Southern hemisphere seasons are the reverse of northern. Therefore the cold months of the year in South Africa are more or less between March and September, and within that time frost can be expected in the Berg with snow falling on the escarpment perhaps 12 times a year. Daytime temperatures at this time rarely exceed 41 degrees Fahrenheit. Snow tends to fall more frequently in the south than the north of the Berg. The Drakensberg is also notorious for sudden rainstorms, and rarely can a substantial hike be completed without at least some rain. It is therefore advisable to go prepared. Summer rainfall peaks between November and February, with average daily temperatures at this time ranging between 75
and 385 degrees Fahrenheit.

In this regard all the usual rules apply. Pick up and take home your litter. Do not light fires. This is not merely to protect against brushfires, but also against deforestation. Conduct your ablutions away from popular campsites and caves, and preferably in grassland at least five minutes walk from a watercourse. Bushman rock art is ubiquitous in the Drakensberg. Do not interfere with any examples anywhere. The removal of any animal or plant material is illegal.

Take time to fill out the Mountain Register at the main office, and give the duty ranger as a detailed an itinerary as possible. Stick to this, and inform the office of any changes, an in particular unscheduled exits, which will avoid unnecessary and expensive rescues. It is advisable to travel in a party of at least four, to not eave valuables lying around, and to inquire in advance of the facts of the security situation. Always carry a tent, and never camp too close to a stream since it is surprising how many hikers fall victim to flash floods. These are very often deadly.

One thing that you can rely on is that if you get into trouble, which is usually as a consequence of injury, but for any reason, the matter will be attended to promptly and professionally. Cell phone covering extends along most of the escarpment, and a message to the parks office, or the emergency services direct, will bring out the Mountain Club and the official ambulance and rescue service which will cost you dearly, so be certain that you
need them before you call. (Ambulance and Emergency Services: (031) 307 7744. Warden
Royal Natal National Park: (036)438 6412.) If you need to send a runner back with a note, be sure he or she knows where to go, where the injured party is situated, and that written messages are composed clearly and concisely.