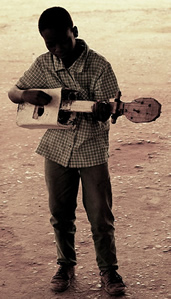 Swaziland certainly is an oddity. It is a tiny landlocked country that is viable as an independent nation only in the loosest sense of the word. It is also one of the few remaining absolute monarchies in the world. Statistically notable for both its extreme rates of poverty and having one of the single largest concentrations of aids sufferers globally, Swaziland is ruled by a fickle, anachronistic, self serving, preening and pampered multiple polygamist who goes by the name of King Mswati III. Bordered to the west by fiercely republican South Africa, and to the east by thoroughly revolutionary Mozambique, it is hard sometimes to determined exactly where Swaziland fits in.

In the interests of getting the ugly bits over first, the myths surrounding King Mswati’s personal indulgence read somewhat like the habits of a feted dauphin of an oil saturated Middle East principality. Inasmuch as Swaziland is indeed an absolute monarchy, Mswati has cultivated an almost medieval approach to governance, characterised by his prevailing attitude of I am very much alright, and be damned to the rest of you.

Just how alright is evidenced by his 13 wives and 23 children, his US$500 000 presidential Bentley, which is just one of a fleet of luxury cars, not to mention those of his wives, and of course their various luxury palaces. Perhaps the most obnoxious controversy of all, however, was his recent attempt to sequester US$45 million from the national treasury for the purchase of a luxury Gulfstream jet for his personal use, which was justified by the need for him to tour the world in pursuit of his various international appeals for aid. Indeed, according to the United Nations, about 70% of the 1.1 million population of Swaziland live below the poverty line, with a quarter of those depending on food aid, and an average life expectancy among them of 39 years. Certainly keeping up with the aid expectations of a country like that would keep a man very busy indeed.

So much for that, on the upside Swaziland is a great tourist destination, and for little country of just 17 364 km² it has plenty to offer. If the grinding poverty of South Africa has a post modern, industrial feel about it, in Swaziland the same phenomenan is almost picturesque. The vast majority of the population live in a rural setting that is agrarian and pastoral in texture, and with the benefits of a lovely highland backdrop to compliment a deeply traditional view of life. It must be said, if you have to live on the bottom rung of the human ladder, let it at least be among the gorgeous forests and hills of rural Swaziland.

Having said this Swaziland is not all hills and forests. The western half of the country is indeed divided fairly evenly between the open montane grasslands of traditional usage, and the rolling and ubiquitous plantation forests of SAPPI (South African Pulp and Paper Industries). The latter, although an industrial monoculture, is very soft and pleasing to the eye, and without doubt lends a gentle background to the occasionally startling stands of indigenous forest, and the streamlets, rivers and waterfalls that compliment this land of ochre and green, of mist, cloud and sunshine.

The eastern half of the country, on the other hand, is more traditionally African, with long, flat, dry stretches of open bushveld savannah, thinly populated, hot and dusty, with only occasional glimpses of green from the extensive South African owned sugar estates.

As an overwhelmingly rural society it is hardly surprising then that the two main cities of Mbabane and Manzini are not brimming with excitement. What they are not, however, are the grubby sprawls bereft of character that many other poor African nations boast as their capitals. Here again South Africa dominates, and well maintained black top roads lead in an out of town, South African banks and franchises fill out South African style strip malls and shopping centres, and as with South Africa, things function in Swaziland surprising well. A good sign is always the discovery of a public telephone that works, an internet café with a broadband connection and a bank with a fair rate and quick changeover of currency (in fact SA and Swazi currency are equally valued and more or less interchangeable). 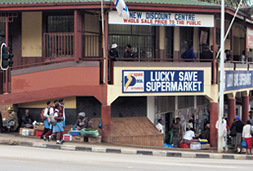 Mbabane is the de facto capital of Swaziland, and is set in the cool hill country to the west of the country. It is a very pleasant and quiet city with a well maintained aspect and a generally peaceful and calm mood. There is not much to do, however, and not a lot to see, and it is usually to the nearby Ezulwini and Malkerns Valleys that visitors head in search of activities and local crafts. Facts about these two destinations can be obtained at the Tourist Information Office situated in the difficult to miss Swazi Plaza shopping centre in downtown Mbabane. There you can also find information about accommodation and local tour options, of which there are quite a few, despite the fact that Mbabane has very little of genuine interest to keep you in town.

For the nature enthusiast Swaziland has a collection of fairly compact parks and reserves that cover both the highland and bushveld aspects of the country. Nowhere is very far from anywhere else in Swaziland, but the park closest to Mbabane is the Mlilwane Wildlife Sanctuary. Mlilwane is a very pleasant, well appointed and tranquil private reserve, and while it clearly lacks the vastness and grandeur of some of the region’s other wildlife destinations, there is a lot to see in the way of antelope and birdlife, not to mention the occasional ostrich patrolling the campsite that will battle you hard and fast for your salad greens if you don’t watch out. There are plenty of accommodation options and guided or unguided tours available, all information being obtainable at the Tourist Information Office in Mbabane, or at the main park office itself.

Hlane Royal National Park is probably the most authentic national park in the country, being more traditional in nature, and set in terrain more conventionally associated with African Wildlife. It is situated in the top northeast corner of the country, and borders the Lebombo Mountains that separate Swaziland from Mozambique. The park hosts lion, elephant and rhino, with both guided walk or drive options, and with camp accommodation, tented and lodge, in two separate locations. Again it is not a huge area, but it is compact, well run and well protected, and the chance of seeing good stuff at Hlane is always very high.

Worth mentioning also is the Mkhaya Game Reserve, a high end private sanctuary that offers the increasingly rare sight of Black Rhino. Swaziland is a key player in the regional drive to conserve and protect this very vulnerable branch of the rhinoceros family, numbers of which are slipping back towards viability after a nasty series of scares in the 1980s and 1990s, thanks largely to efforts concentrated in southern Africa. Mkhaya is not a cheap option, all inclusive between US$145/US$245 per night, but it is worth it for the sake of both the rhino and the fact that the service and accommodation offered is commensurate with the price.

So while wild Africa might be a little on the tame side in Swaziland, what the kingdom is best known for is its well preserved and well maintained traditional institutions. Central to this is the monarchy, and best known is probably the annual Reed Dance. Otherwise known as Unhlanga, the Reed Dance is an Africa style debutantes ball wherein some 20 000 of the most eligible women in the Kingdom step out in traditional dress (almost nothing at all) for the edification of the King, who is permitted to choose from among them his new wife. Where the reeds come into it, it is difficult to ascertain, but during the dance each woman holds a bundle of them that have been gathered specifically from an area some distance from the venue. 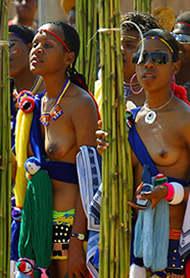 The practice has in recent years drawn some controversy due to the apparent objectification of woman, and their suggested presentation to the King in the guise of potential chattel. However with a fairly even number of supporters and detractors, and bearing in mind the deeply traditional nature of Swazi society, the practice has been preserved. It is worth noting in this regard that King Mswati does not surround himself with supplicant women, and quite a few of his wives are highly educated and accomplished, and as proof of their liberation a few of them have even walked out on him for a variety of reasons.

So while Swazi women are prepared to bare much for the sake of tradition, it would be wrong to assume that the Reed Dance implies that they are slaves to it. If anything it is a case of tradition being the glue of a very tight society, that binds the old with the new, and the liberated to the orthodox. It is moreover the grail of an ancient society’s defining institutions, which in Swaziland seems to mean more to the general public than it does in most countries. This notwithstanding it is a fact that throughout Africa, just beneath the surface of the generic veneer of modern life, tradition is very acute, well preserved and usually religiously observed. However it is in few places that this fact is so visible, and celebrated with quite the enthusiasm, verve and colour as it is in Swaziland.

So if you get the chance during your South African journey it is well worth the effort to stop over in Swaziland. As a virtual extension of South Africa it is very easy to get to and around the Kingdom, and moreover it is quite feasible to access Mozambique from the northern frontier, meaning that a drive through Swaziland to get to Maputo from Johannesburg does not add a great deal of time and distance to the journey, and in fact might even save you time because the Namaacha border post from Swaziland to Mozambique is lot less congested and lot friendlier than the main port of entry at Ressano Garcia. There is a lot to see en route, and even if you do not stay for long, it is the scenic drive of all scenic drives, and is a touch of traditional Africa in the otherwise overwhelmingly first world experience of travel in South Africa.