An Ode to the Landie 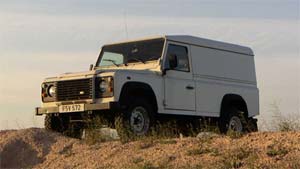 A few years ago Land Rover made the rather lavish advertising boast that seventy five percent of all models ever made were still on the road. Although that might be stretching a point, it is not stretching it that far.

These days the ubiquitous utility vehicle of the Anglosphere has borrowed more than is healthy from the SUV culture, meaning that the iconic Defender, that boxy, all purpose, everyman’s budget 4×4, has lost a lot of the original practicality that once made it the workhorse of the African bushveld.

There has always been a friendly rivalry between owners of the the FJ Toyota Landcruiser series and older Series I and Series II Land Rovers, as to which is the quintessential off road vehicle. If it was one’s desire to get behind the wheel and rough track it from Dar es Salaam to Harare without dipping into the toolbox, then the Toyota has always been the vehicle of choice. If, on the other hand, a certain amount of bush mechanics defines a great rough travel adventure, then the ‘Landie’ is, and has always been the preferred option.

The popular bumper sticker often seen on the back of a Landcruiser, that declares it the ‘Official Land Rover Rescue Vehicle’, is cheeky, but not a total lie. As a long time Land Rover owner and enthusiast I have owned an example of just about every marque prior to the age of the SUV, and can claim without exaggeration that I have broken down everywhere, under every circumstance, and with virtually every degree of severity. However, this being so, I can also say that I have never, at any time, been forced to get on my pins and walk any distance in search of a rescue. That peculiarity which makes the Land Rover the vehicle that broke the back of Africa, is simply that it can be repaired anywhere, and at any time, with a hammer, an adjustable wrench, a length of
bailing wire and a Swiss Army Knife.

The reason, therefore, that the manufactures of this mule like machine can claim that seventy five percent of all models manufactured are still on the road is simply because every part of them is both recyclable and interchangeable, and moreover almost every vehicle graveyard from Cairo to Cape Town has at least one, but usually ten, lying around. If what you need can’t be found on the scrap heap, then waving a few greenbacks around will produce one from somewhere, and if that fails the local metal smith with his tool of Africa, the four pound hammer, will usually make one up in a jiffy.

Meanwhile, certain urban myths have grown up around the Land Rover that I can confirm are usually true. On one particular journey I was midway between Arusha and Dar es Salaam in a 1973 Series II 2.4 diesel when the sump nut popped out and five liters of engine oil spilled out onto the gravel. I found a replacement nut, but with no oil to replace that lost, I decided to test an oft made assertion that bananas work just as well. Bananas are not difficult to find in central Africa, and after I had stuffed about thirty into the sump, and re-bolted it up, the engine fired. It then ran noisily and gingerly for a half an hour or so until the bananas were well mashed up, after which, still nosily, I picked up the revs and made it all the way to Dar es Salaam without her seizing up. Admittedly I then sat at a local beach side campsite or three days with the stripped down guts of my Landie on a tarp, cleaning banana out of every crevice, but after that, with a stomach full of fresh oil, she was back on the road and happily carried me all the way home. 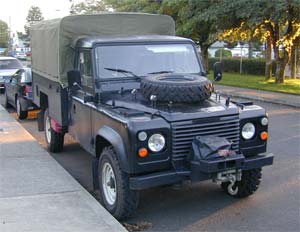 On another I set out from Mutare, in Zimbabwe, to make the long journey overland to Cape Town in an early Series III gas powered ‘straight six’. No more than thirty miles out of town the engine lurched, which was followed by a shocking knock that vibrated the whole vehicle. After popping the hood, my buddy and I stared in disbelief at the old horse chocking in a chronic state of distress. However, with nothing for it, and nothing between us and the South African border, we decided to test the metal of the old marque once again and just keep going. A little later a hydraulic line popped out, and gone was the clutch. Fortunately I had a Series II tranny in place, so crashing the gears was a piece of cake, just so long as there was no need to bring it to a complete standstill.

However, a common sight on African roads is the roadblock. These, more than anything, are the local informal taxation collection points, and although rarely does one encounter a real problem, one also rarely gets away without tipping the cops. This time, as I dropped down through the gears, my buddy leaned out of the window and shouted down the road “No clutch! Can’t stop!’ Upon which the obliging police details stopped the traffic in both directions, pulled back the barricade, and waved us through, catching the coins and the two bottles of warm Castle lager we handed them out the window.

By the time we arrived in Cape Town, six long days later, the engine knock has subsided to a tap, and I had fine turned the art of slipping the clutch, which made me wonder why we needed one anyway. With the head and the sump lying on the grass of the Oatlands Campsite in Simonstown, it now became evident that a ring had shattered and sent broken shards up into the cylinder. These, however, had by then embedded themselves deep in the aluminum piston, and did not seem to a be a problem anymore. Soot and other oily gunk, meanwhile, and packed itself into the space where the ring used to be, and all seemed well. The engine went back together again, we did what we had to do in Cape Town, and drove back home again. All the way up the N1 both we and the engine were blowing out a quantity of smoke, but besides that we were none the worse for the journey or the catastrophe.

Within the polyglot fraternity of travelers in Africa, meanwhile, the Israelis are a uniquely resourceful and pennywise contingent. They travel in tight groups, maintain a clannish aspect at the various campsites and lodges, and more than most appear to appreciate the intrinsic value of the Land Rover. Over the course of a couple of years, after noticing the same Land Rover appearing in my little Zimbabwean town time and again, I began to divine the formula. What happens, it seems, is that one group arrive in Cape Town, and through the network buy a tricked out Land Rover traveling wagon from an outgoing group. They then drive it north to Nairobi, after which, by pre-arrangement, they sell it on to another group of Israelis, who in turn drive it back down to Cape Town, and so on. This is an extremely functional and reliable system, and is cheap also since in most cases the ride is shared between five or six individuals. This, it appeared, was invariably the case; or almost invariably.

On one particular occasion I recall meeting to likely lads, recently released from the Israeli Defense Force, who were making their way north in the usual way. This time, however, their plan was to pick up on a gas share arrangement as many of the lovely and itinerant Aussie or Kiwi traveling babes as they could. While there is not much you can teach an Israeli about thrift, there is also not much you can teach an antipodean about traveling. After many very pleasant liaisons my two friends were finding it increasingly difficult to cover the costs, complaining rather loudly all the while that none of these women were prepared to contribute to the gas. Clearly, I thought, they had a lot to learn, and in due course did. It was not long before they were traveling in the company of other Israelis, and that way things slipped back into the comfortable norm of everybody paying his share in the customary way.

Sadly those great days are now slowly dying as the old working Land Rovers give way to less functional and less recyclable variants that do not always seem to suit the terrain quite as well. The Germans now make Land Rover, and Land Rovers have predictably have become more Teutonic in both aspect and functionality. These days I would be happy to take a long journey in a Land Rover, particularly now that I have completely exorcised the desire to skin my knuckles on a monkey wrench just for the hell of it. Land Rover is still the 4×4 of choice in Africa, and methinks more than anything it is Africa that is changing, and that the old roads, and the old vehicles, just don’t have the same relevance anymore. Isn’t it always the case, that things just ain’t what they used to be?