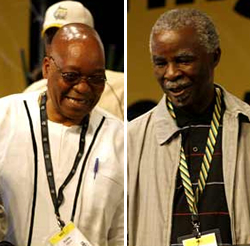 Change In South Africa: What does it mean?

Following South Africa’s ruling party fall-out in September, which resulted in the recalling of the state president, the environmental affairs and tourism minister, who happened to hold onto his post during the purge of his party, was quick to assure that it would be “tourism as usual” in this political country of immense natural beauty and social diversity. But it is unlikely to be politics as usual ever again.

That the iconic South African liberation movement called the African National Congress (ANC) would eventually come to terms with itself as a political party was inevitable, and today, after 14 and a half years in government, the camaraderie of the freedom fighter spirit was officially dissipated with the unveiling of a breakaway political party called Congress of the People (COPE).

COPE comprises several former ANC heavyweights, disaffected comrades ousted during the purge, including high profile cabinet ministers, provincial premiers and former ANC party leaders including its chairman and secretary general. Their manifesto is still unclear, but when in power they revealed a political hunger leaning towards the capitalist notion of self enrichment, which was quite contrary to the ANC tradition of left leaning politics with its strong focus on communal spirit and sharing.

This shift from people politics to money politics was instigated by ousted party and state president Thabo Mbeki, who ruled for nearly 10 years following his take over of leadership from the legendary Nelson Mandela. Increasingly Mbeki, then propped up by today’s COPE leadership, carved for himself the reputation of an arrogant, detached leader who chose to spend more time abroad than at home, leaving the administration of serious domestic issues relating to crime, health and the economy to the arbitrary efforts of his inner ministry of yes men and women.

Frustratingly, when at home this self styled ‘intellectual’ spent a great deal of time attacking the media, defending his inane ideas on HIV/AIDS, denying the extent to which serious crime is plaguing the country, tolerating suspect friends in positions of critical national leadership (his pal the chief of police retained his position despite eventually admitting a “friendship” with one of the country’s high profile crime thugs), and often undoing the nation’s arduous achievements at racial harmonization through spiteful actions and un-called for statements.

But Mbeki’s intention of bullying himself into an undemocratic third term as ANC president proved a bridge too far, and despite his efforts at vindictiveness and subterfuge, the courts of the land finally charged him with having a hand in trying to prevent democratically elected ANC deputy president, the popular Jacob Zuma, from assuming party leadership as per traditional ANC protocol.

The extent to which the new COPE leadership, the former ‘yes’ men behind Mbeki but who now claim to be their own men, are able to convince the ANC electorate, and others, that they have discovered a new found respect for the people of South Africa, will be seen in time to come. But what is highly probable is that they will ‘steal’ a sizeable percentage of the ANC electorate, maybe as much as 15-25%, in the forthcoming April 2009 general election.

To what extent their efforts will affect politics in South Africa is presently unclear. But what is encouraging is that the more votes COPE can garner from the ANC the better for democracy in South Africa, given that the two thirds parliamentary majority enjoyed by the ANC since coming to power has effectively rendered all opposition politics futile.