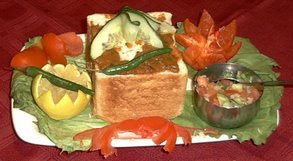 The bunny chow was created in Durban (Which has the largest population of Indians outside of Bradford India) in the 1940’s.

Bunny chow consists of a quarter, half, or full loaf of bread with it’s centre removed and filled with your choice of curry made using traditional recipes from Durban, including mutton, lamb, chicken and bean curries (however the original bunny chow was strictly vegetarian).

The precise origin of the food is disputed but the story I’ve always been told is that the bunny chow was introduced at a restaurant called Kapitan’s on the corner of Victoria and Albert streets in Durban. The traditional Indian meal was roti and beans, but the problem was that Africans could not enter the restaurant (due to apartheid), so the manager, known as Bhanya, opened a hatch onto the pavement and sold takeaways. However, rotis tend to fall apart so he came up with an innovative idea to sell the curry packed inside a hollowed out half or quarter loaf of bread… Bhanya’s Chow proved to be popular and soon became known as bunny chow.

When ordering a bunny chow in Durbs, the local slang dictates that you need only ask for a “quarter mutton” (or flavour and size of your choice). Bunny chows are strictly a messy fingers affair, locals find the use of utensils quite amusing.