In the ancestor worshipping traditions held by the majority (80%) of South Africans (Zulu, Xhosa, Ndabele and Swazi) the Sangoma is the primary and sometimes exclusive healer and counsellor. 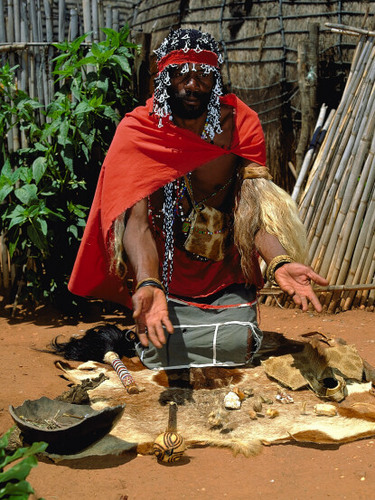 There is no governing body to control who is, and who is not, a sangoma, anyone can claim to be one (there are over 200,000!). Traditionally a new sangoma is called by an initiation illness, often psychosis, headache, stomach pain, shoulder or neck complaints. After which they will undergo “Thwasa”, a period of training including learning humility to the ancestors, purification through steaming, washing in the blood of sacrificed animals, and the use of Muti, medicines with spiritual significance. At the end of Thwasa, an animal is sacrificed to appease the ancestors.

Sangomas are said to access the wisdom of the ancestors to cure ills and divine knowledge. They do this through the use of traditional medicines (Muti), dream interpretation, bone throwing, channelling and possession.

Muti is the name given to medicine given my a Sangoma and has become slang amongst white South Africans as a term for any medication. Genuine muti from a sangoma can contain just about anything, and the more outlandish the better. Lion fat for courage etc. It is also legal to present your employer with a doctors note from such a witchdoctor after a day off.

I often get pamphlets handed to me describing the services of a “new sangoma in town” which promise everything from better sexual performance to winning the lottery and finding a job. Some uber sangomas even have fancy websites.

The use of Muti is so widespread a recent documentary was made concerning its use in sports events, namely soccer. Our biggest teams here resorting to sprinkling urine over the goal posts before a match or burying bundles of herbs under the pitch to “ensure” a win. Teams each have their own resident witch doctor, in the hope that theirs is stronger than the oppositions. I wonder what our new Brazilian coach makes of it.