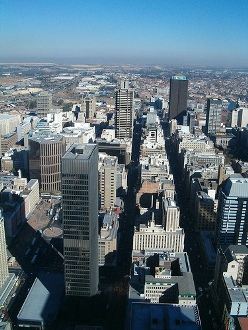 South Africa’s largest city, Johannesburg is reputed to be the greenest city in the world (or the world’s largest urban forest), and home to more than 3 million inhabitants. Known also as Jozi, Jo’burg or Egoli, the city enjoys and enviable year round climate.

Although not one of the three capital cities, Johannesburg is home to the South African financial merry-go-round and the Constitutional Court. With long and vibrant history of gold mining and diamond trade, companies now reclaim and re-process the mine dumps which were scattered all over the city.

Tour the city, visit the museums, pet the lion cubs, visit a gold mine or explore the site where the humankind was born.

Johannesburg is located in the northeastern part of South Africa in the metropolitan province of Gauteng.

How to get to Johannesburg

OR Tambo International Airport in Johannesburg is one of the busiest airports in South Africa. Direct flights link Johannesburg to European cities, such as: Athens, Amsterdam, Frankfurt, Lisbon, London, Madrid, Munich, Paris and Zurich. The city is also linked to the United States –flights to New York, Atlanta, Washington -, Australia – flights to Sydney and Perth-, South America, Asia and Middle East.

There are regular inter-city trains linking Johannesburg to the other cities in the country, such as Cape Town, Durban, Pretoria and Port Elisabeth. Park Station, the city’s central station, spreads across several blocks. While within the station you can feel safe, things aren’t exactly the same around it. So make sure to have the next transport organized in advance.

Buses link Johannesburg to the major cities in the country and in the rest of Africa. The buses arrive and depart from Park Station.

Johannesburg is known for its wonderful dry and sunny climate. Occasionally, during summer –between October and April – some afternoon downpours might occur. Because of the city’s high altitude the temperatures are quite mild. In January, the average maximum temperature is 25 C / 77F, while the average low temperature is 15 C/59 F.

Traditionally, Johannesburg hasn’t been a tourist destination but over the years more and more attractions have been developed for the tourists. The most recent of them are the Apartheid Museum and a large amusement park. 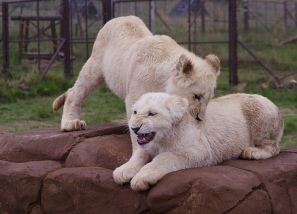 Johannesburg Zoo is one of the largest in Africa and is home to over 3,000 animal species. It’s one of the few places in the world where tourists can see white lions and is the only zoo in the world which successfully bread Siberian Tigers.

Walter Sisulu Botanical Gardens are one of the largest green areas in Johannesburg. It’s home to a lot of birds, including the endangered Black Eagle. Unfortunately, it’s not well signposted so make sure to buy a map and read it carefully. Admittance is 18 ZAR (South African Rand).

Lion Park is home to lion cubs and a lot of other African animals. You are allowed to play with the cubs and you can take self-drive tour through the lion camps. Make sure to remove all loose objects on the outside of the car and remove the wheel covers as well (lions seems to be very found of them!).

Ferreira’s Mine is one of the best places to visit if you want to know how a gold mine looks and feels. Standard Bank Centre actually sits on the gold. While the bank was constructed, the abandoned mine has been discovered. Now, visitors can enjoy parts of the old mine as well as visit a museum. Entrance is free and the site is opened during normal banking hours (8 AM to 4 PM).

Just 25 km / 16 miles outside the city, there is the Cradle of Humankind UNESCO World Heritage Site. The fossil site is the world’s richest hominid site and home to first adult Australopithecus africanus. Also, a near-complete skeleton of an early Australopithecine has been found here.

Johannesburg has one of the best climates in the world, so there is no perfect time to go there. It is a thoroughly modern city so festivals and events go on all year.

Crime: Johannesburg shares the same general dangers of street crime and muggings as the rest of South Africa, and in fact is probably one of the most potentially dangerous of all South African cities. Don’t be fooled by the atmosphere. Keep your wits about you and remember that South Africa is one of the most dangerous countries in the world. There are certain areas in Johannesburg that are more dangerous than others, but nowhere is particularly safe on the streets after dark, so seek and follow local advice on the matter of crime and general safety wherever and with whomever you go.

The Johanneburg Central Business Distirc, or whats left of it, is a no-go area after dark, and is worth avoiding at any time

In most of South Africa tropical diseases are rare. Johannesburg has almost no incidence of malarai. As a matter of policy, however, a course of anti-malarial drugs are advisable, particularly if you intend traveling to the lowveld or the east coast.

Travel Doctor clinics are to be found in all the major centres where you can get health advice on malaria, yellow-fever, AIDS and any other tropical diseases, and acquire all the vaccinations and prophylactics necessary for your extended journey.
Tap water is usually safe to drink.

Sunburn risks are high everywhere in South Africa so hats, long sleeved T-shirts and sun screen are a must.