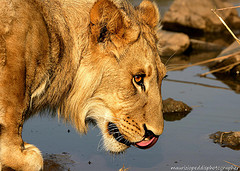 Rarely does a country suffer and enjoy such striking contrasts as South Africa. On the surface it is barely recognizable as a developing country, with such iconic international cities as Cape Town, and with the mighty economic machine of Johannesburg and Gauteng. At the same time South Africa is burdened with poverty and underdevelopment on a grotesque scale, and with the forty-something generation of blacks dealing with the reality of living without educations that were sacrificed for the struggle, levels of crime and violence in the country are astronomical.

The layers do not end there. The preservation and conservation of nature and wildlife in South Africa is on a level that exceeds many countries in the west. The influence of this is widespread, effective, highly sophisticated and largely corruption free. South African standards of conservation affect the entire region, and it is thanks to efforts in South Africa that many vulnerable species, such as the Black Rhino, have survived at all. The South African parks system is extremely well maintained and serviced, and is accessible to locals and foreigners alike at very reasonable prices.

The quandary for anyone contemplating a trip to South Africa is the staggering incidence of crime, and how a nation so fundamentally dangerous can possibly be a safe travel destination. What needs to be considered in this regard is how sophisticated the industry is in South Africa, and how extraordinarily diverse and widespread are the options. There is nothing within the huge spectrum of tourist attractions in South Africa that individually or in combination is not covered by a tour operator or six. Coupled with this the options of fly in/fly out safaris anywhere in the region, or integrated lodge/wildlife/culture destinations, wine tours, golf tours, desert tours, hiking, biking, climbing, rafting, paragliding, cage diving, regular diving, hunting, riding, gay, straight, bi, music, dance, drum…etc The list is literally endless.

Is South Africa A Safe Destination

This is South Africa. Yes it is a dangerous country with high levels of crime, but it is also one of the world’s most sophisticated travel destinations where at no time should you be left standing, looking left and right, and without a guide, escort or tour leader. South Africa and the associated region also offers far better value for money than the tired, old, over priced and canned destination of East Africa. Sure you will have to travel far to find the equal of Serengeti and Ngorongoro Crater, or Zanzibar, Mafia and Pemba Islands, but Kruger National Park is no less iconic, and neither is the Kgalagadi Trans Frontier Peace Park, and certainly the coast of Mozambique and the Paradise Islands compare in every respect to the East African coast.

So do not be put off by what you hear. South Africa is a premier global destination, and is a springboard to the wider Southern African Region.