The Kalahari region of Southern Africa is the dry heart of the sub-continent, lying roughly over the three way junction of Botswana, Namibia and South Africa, and extending south as far as the Northern Cape. This is the arid northwest of South Africa, almost entirely desert or semi-desert, but also a landscape of enormous material wealth and variety. 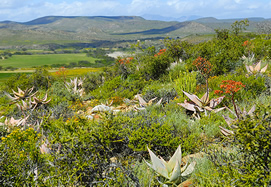 The original economy of the region was built on diamonds, first discovered in 1866 on the banks of the Orange River, which transformed South Africa from a limping colonial backwater to the main theatre of British imperial capital adventure and war. The Orange River as it flows down from the mountain kingdom of Lesotho provides the lifeblood of a local agricultural industry, including the irrigation of vineyards in the area of Upington.

Distances are vast and populations scattered, and landscapes dry, arid and sparse. Several unique ecological zones exist in the region, as well as a number of small mountain ranges and other areas of unique natural heritage. Afrikaans as a language is spoken on a wider scale in this region than anywhere in South Africa, and is spoken by the largely Cape Coloured and white populations. Amongst the blacks Xhosa and Tswana are spoken, but in this region blacks are outnumbered by coloureds, and whites are outnumbered by both.

This is a wonderful part of the country for motor touring, as the roads are good, the distances wide and the countryside expansive and variable. Small towns dot the landscape, and in most places a fair selection of accommodation options exist on the usual scale of B&B up to luxury lodges and private game reserves.

Kimberly is the capital of South Africa’s Northern Cape Province, and is the historic location of the South African diamond industry. It was home for many years to South African arch capitalist Cecil John Rhodes, who made a colossal fortune on the diamond fields, and then went on to use that wealth and influence to reshape the colonial landscape of central Africa. The city was besieged during the Anglo/Boer War. 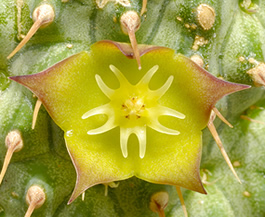 Kimberly is a small city of little more than 210 000 souls whose principal tourist attraction is the Big Hole, a the flooded remains of diamond excavations of the 19th century that has left a cavity in the earth’s crust 463m wide and 240m deep. It has been widely, and erroneously labelled the deepest manmade excavation in the world. However deep it is, the Big Hole is a heck of a big hole, and worth a moment of anyone’s time to peer in and wonder at the power of commerce.

Other sites and museums dedicated to diamond mining or the Anglo/Boer War are numerous, and the city and surrounds form one of the important destinations on the South African battlefield circuit.

The Kgalagadi TransFrontier Park is arguably one of the flagship wildlife parks in South Africa, and one of the more successful examples of local/international cooperation in conservation. The park reaches into South Africa and Botswana, and covers a large area of Kalahari habitat. It is overseen by both the South African and Botswanan wildlife management departments, and the Peace Parks Foundation.

More of a region than a destination, the Karoo covers much of the west and northwest quarter of South Africa, and has traditionally been an area of sheep husbandry and occasional irrigated agriculture. The region has always had a curious appeal, with the London Missionary Society settlement of Kuruman being traditionally one of the most important points of early missionary outreach, and now a beautifully situated town. Once the home of significant populations of zebra and antelope, lately these are confined to a handful of parks and several private game reserves.

Lookout for the towns and villages of the Karoo – or dorps as they are termed in South Africa. Simple and rusticated, with a strong flavour of the 19th century, and even some strange and unexpected oasis in the desert. 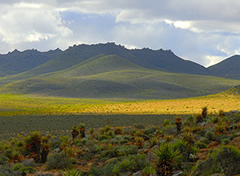 Famed for its annual wild flower displays, Namaqualand is a region of the Karoo that is divided by the Orange River, and is also almost entirely of a desert and semi desert ecology. However the areas experiences an influx of visitors in spring (April/May) when the normal sparse and uniform landscape erupts in a blush of multicoloured floral displays. Regarded as a specific biome, the area is an expression of desert ecology with a widespread diversity of succulents and other peculiarities. It also enjoys a human diversity drawn mainly from old time Dutch freehold farmers, missionaries, runaway slaves and the wandering hunter/gather Khoisan.

Richtersveld is a part of Namaqualand that is characterised by broken and mountainous terrain with a similar diversity of dry-land plant species, aromatics and succulents. It is also home to the same seasonal floral symphonies as Namaqualand, but as a landscape separate, is a World Heritage Site. A favourite with true eco-junkies, it is one of those habitats that appears dry, featureless and empty on the surface, but under closer scrutiny reveals a multiplicity of life forms both small and unexpected. Home to 650 different plant species, and the world’s largest diversity of succulents, it also provides habitat to many different antelope and carnivore species, including the rare Hartman’s Mountain Zebra, steenbok and klipspringer. It is not always easy to get into the various nature preserves, but if you can, you will not regret it. 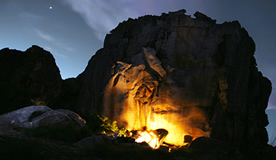 Cederberg is one of those special places, a magnet for thinkers of thoughts and feelers of feelings, and moreover sought after thanks to it’s clear high desert skies by stargazers and amateur astronomers, who might also periodically share thoughts with the spiritual travellers. Situated in the vicinity of the town of Clanwilliam, and about 300km north of Cape Town, it is the home of rooibos tea and the Cederberg Mountains and Nature Reserve. Once again the landscape is arid and broken, but again home to a rich diversity of life. Named after the Clanwilliam Cedar, a diminutive variety of conifer, it is the dominating sandstone formations of the three principal mountain ranges that give the area its identity. An exceptional hiking and hill walking destination, it is quiet, sparsely populated and infrequently visited. Definitely one of the must-see destinations in backcountry South Africa.

On the whole the region is for those in search of subtle beauty in a land of limited appeal. The masses will not infiltrate, there is nothing here for them. This is a rarity, and for those who like it, it is there.

The summers throughout the region are hot and dry – 30°C (86F) or higher, with highs up to 40°C (104°F) – while the winters are cold with limited rainfall, with certain areas in the south dipping regularly to below freezing. A dusting of snow is common on the hill summits in winter. Days in winter tend to be fresh and clear.

If you can go there twice, then go before and after the annual floral displays, just to appreciate the transformation, if you cannot, then go in May/June when the effect is total. If your interest is more general then the winter months are the best for touring, hiking and getting under the skin of the veld. Summer is hot and dry, and while that has an ambience all of it own, it is not the most flattering time of the year to see the region.

Crime: The region shares the same general dangers of street crime and muggings as the rest of South Africa. Don’t be fooled by the isolation and backcountry atmosphere. Keep your wits about you at all time, and remember that South Africa is one of the most dangerous countries in the world. There are certain areas that are more dangerous than others, and although the Northern Cape is generally a quieter and more respectful part of the country, nowhere is particularly safe on the streets after dark, so seek and follow local advice on the matter of crime and general safety wherever and with whomever you go.

In most of South Africa tropical diseases are rare, and in particular in the dry and clean air of the Northern Cape. This is not a malarial zone, so no particular precautions are necessary. At certain times of the year mosquitoes are in evidence, so a traveling mosquito net is always a good idea.

Travel Doctor clinics are to be found in all the major centers where you can get health advice on malaria, yellow-fever, AIDS and any other tropical diseases, and acquire all the vaccinations and prophylactics necessary for your extended journey.
Tap water is usually safe to drink.
Sunburn risks are high so hats, long sleeved T-shirts and sun screen are a must.