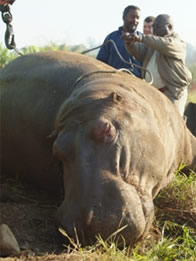 Nonkululeko, KwaZulu-Natal’s surfing hippo, has been shot dead by authorities this week.

The wandering hippo, whose curious behavior of taking to the surf was reported on earlier on SouthAfricaLogue, was apparently posing an increased risk to human life. Her death follows suspicions that she was responsible for the fatal attack this weekend past on 60-year old man, although wildlife authorities seem to think the wounds are not consistent with a hippo attack. Forensic authorities said the autopsy report on the man would only be available for inspection towards the end of the year.

Nonkululeko meanwhile had been wandering freely for months, apparently starting her journey from the St Lucia wetlands in Maputaland some 250 kilometers north of Durban. It was only towards the end of June when she started nearing the populated coastal resort towns which lie about 50 kilometers north of Durban that Nonkululeko started attracting public and media attention. From then on her future lay in the balance, even although authorities repeatedly warned the public to keep clear of the animal.

Wildlife groups are aggrieved with the authorities for not making the effort to restrict the hippo to her native habitat in the wetlands area, a World Heritage Site where hippos live in abundance. Migrations of individual hippos are not common (the most famous story being that of Huberta who wandered for 1,600 kilometers in the 1920s) and even family groups will mostly migrate only under circumstances of poor rainfall and drought, which is not the situation in the wetlands area.

Most Dangerous In Africa

Hippos however are the animals most responsible for death to humans in Africa, and are particularly vulnerable when feeding out of the water, which they do from sunset to sunrise. It is when hippos leave and later return to the water that attacks are most likely to occur as they encounter people drawing water or washing on the river banks.