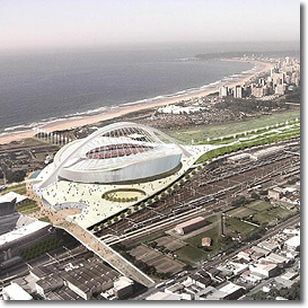 Named after the former Secretary general of the South African Communist Party Moses Mabhida Stadium is a custom built structure commissioned as part of Durban’s preparation for the FIFA World Cup 2010 Soccer Tournament. The old Kings Park Soccer Stadium was demolished to make was for this new, state of the art facility. Durban has a long history of soccer with the first national league started in the city.

Moses Mabhida Stadium is expected to have a seating capacity of between 70,000 and 80,000 people, and is intended after the World Cup Tournament to serve Durban as a multi-use stadium. It is situated adjacent to the ABSA Stadium in the Kings Park Sporting Precinct which hosts a variety of different sporting disciplines including athletics, rugby, golf and swimming. The new complex will include an indoor arena, sporting museum, sports institute and a new transmodal transport station

Moses Mabhida Stadium is ideally situated between accessible rail and road links, and close to downtown Durban, the hotel district and all the main beaches.