From the Kaapse Klopse to the Field of Dreams: SA Music Culture 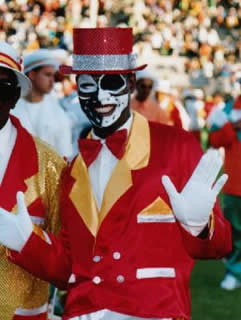 Legend has it that two friends, Peter Ferraz and Bart Fokkens, were sitting around over a beer one evening in 1990, discussing the decline of the great music festivals of yore. Concluding that the moment had come to reverse this trend the two decided then and there to found a festival in the grand old tradition, and thus the Splashy Fen was born.

For those of you not already making plans to drive, hitchhike or walk to Splashy Fen farm in the Drakensberg, then it is probably too late to catch the opening acts, but the festival runs for four days over easter, so if you hurry, you might not miss the best of what is on offer.

Things have come a long way since the first ad hoc jam that launched the festival, and since then Splashy Fen has diversified it’s roots in folk nostalgia to embrace much of what defines South African contemporary music. Nowadays you can expect anything from the black styles of mbaqanga and iscathamiya, to alternative rock/pop, and to grunge, punk, hard rock and classical/jazz fusion. Overwhelmingly white, however, Splashy Fen is probably not for those looking for the quintessences of township jive, besides the mixed race big band and ska outfits made for easy and very general consumption. Splashy Fen made it’s debut as the brainchild of two men confronting middle age, and although it has razzed it up with some quite adventurous local beats since then – for it must said that South Africa, across the race spectrum, has plenty of those – it will probably be a disappointment for anyone hoping to tap into the rich black vein of South African city and ghetto music.

What to Look For

However one thing that Splashy Fen does reveal is that South Africa is indeed the Rainbow Nation, pushing out a diversity of sound and image that is reflected in the thoroughly modern program of homespun South African music. This year an eclectic line up has so far included the opening jams of guitar heavy Durban rock outfit His Dying Wish, the growling and energetic ‘Homegrown Hoodoo’ of R&B foursome Black Cat Bone, and local KNZ ambient folkie Angus Burns. Others to look forward to are the all girl Joburg trio of ska grungers Japan and I; Durban’s Crossing Point, who according to their website, play positive, progressive rock/hard core, and about this there is no doubt; ‘The Otherwise’, funk/rock/alternative; and featured artist for this year, Afro/Celtic folk innovator Miriam Backhouse. Perhaps the act most to look forward to is the authentic, Africa-Ska, mixed race outfit The Rudimentals, with shades of the Specials, UB40, but also with an unmistakable, sophisticated and socially conscious Afro vibe.

If, however, you have missed this years Splashy Fen, then fear not, because there is always next year, and what’s more the South African music and festival circuit is a full and mixed bag. You can seek out and enjoy a variety of events that encompass everything from Afrikaner cow tunes to international jazz and every style of Afro beat and groove available in the country. The Oppikoppie ‘Not Quite Easter Festival’ kicks off from the 25th to the 27th of April, while the Afrikaans music Deuriemikke Karnaval is happening this year on the 30th of April. The Annual Cape Town Jazzathon is normally staged in the Mother City in early January, while this year’s Joy of Jazz is yet to be announced. The internationally acclaimed National Arts Festival, held in the university town of Grahamstown, is this year scheduled for between 26 June and 5 July. The equally acclaimed Cape Town International Jazz Festival is set for the weekend of 28/29 March while the annual OBZ festival in Cape Town is usually held in December.

Besides these, frequent summer open air festivals and performances featuring a wide spectrum of local and international talent can be found at such venues as the Kirstenbosch, Durban and Roodepoort Botanical Gardens, the Oude Libertas Amphitheatre in Stellenbosch, and parks and open areas across the country. For the best homegrown, country entertainment, featuring rustic local fare and music is the Klien Karoo Kunstefees, usually held in Oudtshoorns in late March. Then there is the Aardklop (Earthbeat) Festival held in Potchefstrrom in late September, and the FNB Vita Dance Umbrella held in Johannesburg in late February. In Lenasia just outside Johannesburg an annual Muslim music festival, the Ijitma, is held between 23 and 25 March, attracting huge numbers of local Muslims and Muslim music enthusiasts.

Added to this, the number of clubs and music venue scattered across the country are too numerous to name, and everything from world music, to every shade of South African traditional, hop hop, mbaqanga, iscathamiya, kwaita, a capella and reggae is available to the determined rhythm seeker.

The last word in South African arts and culture perhaps belongs to the Kaapse Klopse, or the Cape Town Coon Carnival, an annual celebration of the variety and vitality of local ‘colored’ culture. In South Africa the word ‘colored’ does not specifically imply people of color, but is an umbrella term for the vast spectrum of those in South Africa of mixed race who occupy a sub-culture entirely of their own, owing much to all, and little to none, and yet always proudly independent. Owing its origins broadly to the black and white minstrels of the post reconstruction period in the US, the Kaapse Klopse is not an accommodation, but a celebration, and is one of those quintessentially South African experiences that should not be missed. Look out for it in early January, and eat, drink and be merry with the spice and vivacity of unapologetic, unabashed and unadulterated Cape Town groove and culture.