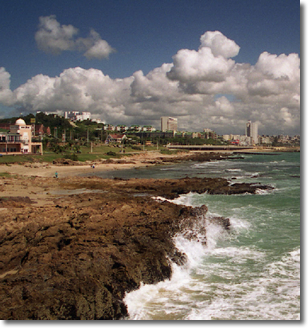 Known as the Windy City, Port Elizabeth is the kite surfing and wind/surf sport capital of South Africa. It also enjoys some of the best beaches on the south facing shores of South Africa, and despite a long history, and a fine historic legacy, it is a young city with plenty of action, and an excellent tourist destination being situated at the end of the famed Garden Route.

Port Elizabeth is situated on the western edge of Algoa Bay, or Nelson Mandela Bay, and is a fine example of the best that the South African temperate Coast has to offer. It is the largest settlement in the Eastern Cape, with the Garden Route to the west and the Transkei Wild Coast to the east. Apart from the urban pleasures of a beautiful and vibrant city, it also has access to the wonderful hinterland of Eastern Cape landscapes, and the famous Addo Elephant National Park.

The usual selection of historical monuments and museums celebrate the origins of this particular city, that dates back to the 1820s when a group of 4000 settlers arrived under the encouragement of the Cape Colony. There is also the South African Air Force Museum, The Nelson Mandela Metropolitan Art Museum and the unusual Red Location Museum, which is part of local cultural developments to highlight aspects of black township history.

From the venture sport, nature and marine perspectives Port Elizabeth has a finely tuned local tour structure that can offer everything from whale watching, sand boarding, diving, surfing, kite surfing and local nature trails and wildlife tours. Accommodation facilities are mixed and very varied, with a strong selection of mid-range lodges, hotels and guest houses alongside a selection of well appointed backpackers lodges and camp sites. A vibrant pub, restaurant and nightlife scene compliments a city with an unexpectedly diverse social energy.

This is the Windy City, so expect that at least, but besides this the city enjoys a temperate, sub-tropical climate with mild weather year round and with rainfall light but persistent. Summer (Oct –Feb) temperatures can reach the mid-30s Celcius, but more frequently a pleasant summer day will feel like 25°C, with winter (May-Aug) daytime lows hovering around 10 – 11°C.

Winter can be a bit wet and bleak along the Cape Coast, but conditions can never really be described as hostile. Summer is the best time for all the beach, festival and sports action, although the Christmas period can get crowded and prior booking is always a good idea. Port Elizabeth is open for business all year round.

Crime: Port Elizabeth is not as dangerous as Johannesburg or Cape Town, but it is still a high crime region and no chances at any time should be taken in and around the city. The dangers of street crime and muggings are as high as anywhere else in South Africa. Don’t be fooled by the easygoing atmosphere. Keep your wits about you and remember that South Africa is one of the most dangerous countries in the world. There are certain areas in Port Elizabeth that are more dangerous than others, although nowhere is particularly safe on the streets after dark, so seek and follow local advice on the matter of crime and general safety wherever and with whomever you go.

Seek safety advice from you hospitality establishment wherever you are

Don’t leave anything of value in your car overnight

Incidences of car hijackings in South Africa are high Always be aware of your surroundings, particularly at night

Don’t stop on any of the freeways for more than a few minutes, and in the instance of a breakdown, call for help

In most of South Africa tropical diseases are rare. While Port Elizabeth enjoys a very mild, sub-tropical climate, incidences of malaria are rare, although there are occasionally mosquitoes about, and repellent is a must. As a matter of policy a course of anti-malarial drugs are advisable, particularly if you intend traveling further north up the coast.

Travel Doctor clinics are to be found in all the major centers where you can get health advice on malaria, yellow-fever, AIDS and any other tropical diseases, and acquire all the vaccinations and prophylactics necessary for your extended journey.
Tap water is usually safe to drink.