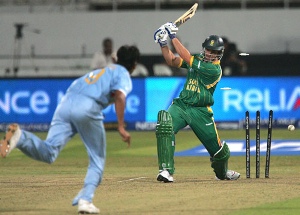 Sport in South Africa is the national religion. Everyone seems to be attracted by sports, not just the males. When a South African team wins fireworks and celebrations reverberate across the largest cities.

Ellis Park, located in Johannesburg, was built in 1927, is a world famous rugby stadium. The 1995 Rugby World Cup final was hosted here. Today is a top-class stadium, home to the Golden Lions Rugby Union, the Premier Soccer League’s Moroka Swallows and the soccer club Kaizer Chiefs. Although it’s recognized as one of the most popular ruby stadium, it also hosted a lot of important soccer matches.

Soccer City, located in Johannesburg and built in 1987, is South Africa’s national soccer stadium. It will be the main stadium for the 2010 Soccer World Cup, hosting both the opening match and the final.

Football (or soccer, as it’s known in South Africa) won the heart of every South African.

The South African team was formed in 1992 and the first official match was played against Cameroon in Durban on July 9, 1992.

The soccer team is by no means the best in the world, but proud and joy were felt when South Africa won the African Cup of Nations in 1996 on their territory. The national team, nicknamed “Bafana Bafana” (or “the boys”) is quite good at beating giants but losing in front of small teams. Thankfully South African soccer has been spared by the so common hooliganism in UK.

The tickets for the 2010 World Cup have already been published by the Organizing Committee. The prices range from USD 20 for a ticket for a group stage match to USD 900 for a ticket for the final. About 3 million category 4 tickets (the cheapest: USD 20) will be sold exclusively in South Africa. Also 120,000 tickets from the same category will be distributed on a complimentary basis. Tickets will go on sale starting from February 2009.

Rugby is one of the three big sports, along with soccer and cricket. Traditionally, mostly blacks, who are referred as “colored” by the locals, played soccer while rugby became the winter game of choice.

The national rugby team, the Springboks, is one of the best rugby teams in the world. In 1995, the Boks won the World Cup and in 1998 they won the Tri-Nations cup.

For many years, cricket has been regarded as the game of the privileged whites, but great efforts have been put to make it a game for all South Africans. Over the years, many black players have made it to the top and have been chosen in the national team.

The South African national cricket team is known as the Proteas (formerly known as the Springboks). After being isolated for 21 years because of the apartheid policies, the Proteas managed, in a relatively short time, to become one of the elite teams of world cricket.

South Africa hosted the Cricket World Cup in 2003 but unfortunately the Proteas disappointed the fans and failed to win the cup.

South Africa has the best weather for golf and some of the best courses in the world. Also, a number of elite players have been born here: Bobby Locke, Gary Player, Ernie Els and Retief Goosen.

South Africa is home to some of the world’s toughest endurance races, which includes Comrades Marathon and the Two Oceans. Both draw a lot of competitors and fans every year.