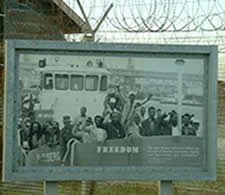 Prison Islands occupy a particular place in the macabre mythology of human history. Thanks to the searing autobiography of French detainee Henri Charriere, Devil’s Island is one of these, although perhaps more famous, if somewhat less malignant, is the South African redoubt of Robben Island.

Robben Island, with its cell no: 46664, the 18 year home of iconic black nationalist Nelson Mandela, was granted International Heritage Site status in 1999, five years after the collapse of apartheid in South Africa, and largely thanks to the incarceration on the island of leading ANC activists of the anti-apartheid era. Since then it has been a museum, and home to a diminishing number of local residents, all in one way or another associated with the sites penal past, and all nowdays in one way or another associated with the cultural museum that has taken its place.

The History of the Island

Robben Island, meaning Seal Island in the Dutch, lies some 12km off the coast of the Cape Penninsular, and is accessible by ferry from Nelson Mandela’s Gateway on the Victoria & Albert Waterfront in Cape Town. Its penal heritage corresponds more or less with the period of colonial interest and activity in the region, with its initial use in the late 17th century to isolate political activists and leaders of the Dutch Far East colonies. The Maturu Kramat shrine, built on the Island in honor of imprisoned Musilim holy man Sayed Adurohman Moturu, who, when released, founded Islam among local slaves, and became the first Imam of the colony.

During the 19th century a number of native chiefs were imprisoned on the island during the colonial wars of containment and occupation of that period, as were, of course, the activists and nationalists of the more modern period. Parallel to this the Island has been used alternately as a hospital, a leper colony and a training and defense station during WWII. Vestiges of all these functions remain to interest visitors to the site.

While a recent newpaper article published in South Africa highlighted the diminishing permanent population of the island, stagnating now, somewhat, since the passing of it’s primary functions, the South African Government nonetheless values the site as deeply symbolic of the attainment of freedom. Until recently the regular ferry that crossed the choppy waters of the bay was the only link from the island to the outside, but a recent council purchase of a $3.5 million, 300 seater ferry named approriately Sikhululekile (We are free), has eased the unpredictability of movement between the mainland and the island, and eased also the functionality of the museum. Recently South African Finance Minister Trevor Manuel put aside more than $7 million for the maintenance and development of Robben Island Museum, for, as he put it, ‘conserving and promoting cultural heritage’.

A tour of the Island is, of course, a sombre experience, although far from the horror of Devil’s Island, one is confronted often by the clipped, ordered, and almost Teutonic approach that the apartheid system in South Africa brought to legal confinement. The guides available to escort individuals or groups through the site are either ex-prison employees, or ex-prisoners themselves, and as might be expected the tour is conducted with both sensitivity and candour.

A ticket costs SAR150 for adults and SAR75 for minors. It is a guided tour that usually lasts for about three and half hours, and includes transport to and from the Island. There are aspects of interest on the Island other that it’s cultural heritage, and some features of its ecology, wildlife and geology are notable. Email bookings are available, or telephone (021) 413 4200