Arniston is a sleepy fishing village about 2 and a half hours from Cape Town and is a favourite retreat for families, and weekender’s. It is frequented mainly by South Africans, so if you are looking for something less touristy and with no choice of restaurants this is it.

The town is actually called Waenhuiskrans (named after its cave), but is now referred to as Arniston after H.M.S Arniston was wrecked here in 1815.

You get here on the N2 highway out of Cape Town until Caledon, then head towards Bredarsdorp through the Cape wheat and Grain basket and then towards to the Coast. Arniston is near Cape Aghulas which is the southernmost tip of Africa. 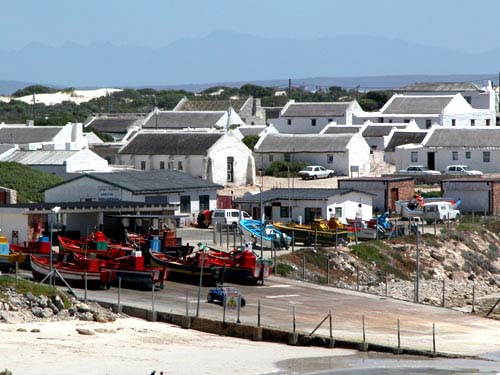 The gorgeous fishing village of Kassiesbaai, alongside Arniston is 200 years old and has been declared a national monument. The Whitewashed thatched cottages are still inhabited by the local fishermen who leave at dawn for the days catch. The ocean is a wonderful turquoise colour from the limestone and has some superbly attractive beaches. Roman and Bikini beaches being the most popular.

We came with mainly fishing in mind, but there is horse riding, hiking, oyster collecting and exploring the dunes to keep everyone busy. We caught Hottentot (Bream) Streepie, Barbel and a Sandshark.

I have been here a number of times growing up and to my mind it has not changed that much, the Arniston hotel has had a revamp, but the town still retains its character and come highly recommended as a slightly off the beaten track getaway.