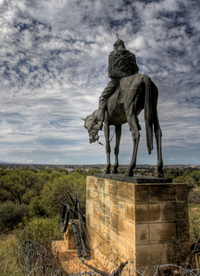 Bloemfontein, or Bloem to her friends, is the capital of the Free State Province. It is also the judicial capital of the nation and one of the quieter and more conservative cities of South Africa. Bloem is situated in the midst of the windswept grassland of the interior at an altitude of 4 500ft…perfect cheetah country as reflected in the name of the provincial rugby team – the Cheetahs, and the Sesotho name for the city – Mangaung – or Place of Cheetahs.

The museum of the nation…

Bloemfontein is the moral heartland of the Afrikaner nation, although in practical terms it is as racially diverse as anywhere else in South Africa.

It nonetheless holds its historic legacy dear and as a consequence has probably the largest concentration of historic monuments and museums in the country.

In the minds of many Afrikaans speaking South Africans the signature event in their history was the Anglo/Boer War that took place at the turn of the 19th century. The Anglo/Boer War Museum captures the sobriety of the event and is as essential a port of call to any visitor as the Apartheid Museum in Johannesburg.

Coming a close second in terms of importance to the white tribes of South Africa is the matter of sport, and rugby in particular. In this regard the Choet Visser Rugby Museum is a landmark. Visits are by appointment only. Call on +27 (0)51 436-4124

Other museums worth visiting are the Fire Station Museum, the National Museum, the Presidency Museum, Queens Fort Military Museum and the SA Armour Museum.

For a more cultural muse visit the Oliewenhuis Art Museum

Another of Bloemfontein’s alternative names is the City of Roses which reflects a national passion for gardening, but in the case of Bloemfontein the high grasslands surrounding the city support a staggering diversity of wild flowers. Visit the Free State Botanical Garden in Hillsboro where some 400 local floral and succulent species are on display.

With a passion for rugby in the Free State comes a passion for beer, and complimenting both is usually a barbecue, or braai. Featured on the grill is usually steak, boerwors (farmer’s sausage) and pap, a variant of the ubiquitous African stiff corn meal porridge.

Besides this there is a limit that Bloemfontein can offer the gastronome. However the city offers a full compliment of all the local franchises with a smattering of unique restaurants with a cosmopolitan flavor. If beer is your tipple, then look out for the Windhoek brands which reflect the neighboring Namibian production of pale German lagers and Pilsners.

There are none of the spectacular conservancies and wildlife park associated with South Africa anywhere near Bloemfontein, but there are a handful of smaller venues that offer a mild glimpse of the wild highveld of old and the animals it once supported. Soetdoring Dam Nature Reserve and Rustfontein Dam Nature Reserve are the most popular. Look out for eland, springbok, blesbok, black wildebeest, zebra and red hartebeest.

For the adrenalin enthusiast the options are slim. However in the land of big skies skydiving is a popular local adventure sport. There are a number of local outfitters offering tandem skydives, static line course, accelerated freefall courses and progressive freefall training.

The Bloemfontein Skydiving center is situated at the Tempe Airport. Check out the Drop Zone website. Inquire at the desk of your lodge or hotel fo rother option.

Stargazing in the southern hemisphere…

To round off a sedate visit to a tranquil city why not take and alternative advantage of the big skies of the Free State and visit the Boyden Observatory.

Although visits to the observatory are by appointment only this is the best opportunity for an uncluttered look at the southern hemisphere starscape.