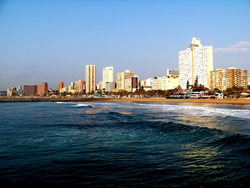 While the city of Pietermartitzburg is the provincial capital of KwaZulu/Natal, Durban is the main port city and the de facto economic capital.

It is also one of the liveliest and most atmospheric of all South African cities, with a little less of the deep history that characterizes Cape Town but with no less cosmopolitan vitality and cultural interest.

Perhaps the most interesting cultural slant that Durban has to offer is its substantial East Indian population that is reputed to be the worlds largest outside of India itself.

The history of the KwaZulu/Natal Indian community has its roots in the importation of bonded labor from the Indian sub-continent to work the sugar plantations that are still a feature of the landscape around Durban and the South Coast.

A merger of Indian, black and white South Africa… 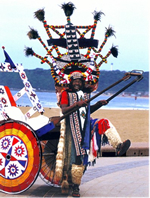 The Phoenix Settlement was established by Gandhi in 1904 as a site to expound his values of self-help, the dignity of labor and community living. The Phoenix area was in 1976 formally established as an Indian settlement, or ‘township’, but is in fact one of the oldest Indian settlements in South Africa. It remains largely unintegrated and is still a showcase of Indian/KwaZulu culture.

Several annual Hindu festivals also take place in and around the city, including a re-enactment of Gandhi’s iconic ‘Salt March’. Make a point if you can of visiting the downtown Madrassa Arcade for an authentic Indian shopping experience, the Oriental Bazaar, the Juma Mosque and slightly out of town the Alayam Hindu Temple.

One must not forget, though, that Durban is an African city situated in the realm of the Zulu that remain one of the highest profile black ethnic groups in South Africa.

There are a number of cultural villages in and around Durban where Zulu culture and society are showcased – some quite canned but others very authentic. Shakaland is probably the best known of these, and although it falls somewhat into the ‘canned’ category, it is very well canned and certainly gives you a strong feel of Zulu culture.

Other museums, monuments and cultural centers reflect on wider aspects of the history of this region.

Try a Durban curry or a bunny chow…

With such a strong Indian influence in and around Durban it is not surprising that the local food traditions are flavored accordingly. For Indian food aficionados the Durban Curry is one to try. It is derived from the hot peasant dishes originating in the provinces of Gujarat and Tamil Nadu. Its distinctive red color derives from the piquant red chillies used as the major ingredient.

>> Some Durban curries are better than others, so try out a few different restaurants and make your own choice

Make a point also of trying the local ‘Bunny Chow’ variants. Bunny Chow is unique to Durban and is a half loaf of bread with the inside removed and replaced with a curry sauce. It is a distinctive fast food and a great local favorite.

Seafood curries are a local specialty, and seafood in general is one of the great pleasures of eating out in South Africa.

While it may have plenty of social and cultural attributes, the main attraction of Durban and the South Coast is sun, sea and surf.

The 4 mile long Golden Mile is the main beachfront. It is edged with hotels along the Esplanade and closer to the shore with bars, restaurant and theme parks.

For families Addington Beach offers the most access and entertainment while for surfers and water sport enthusiasts Dairy, Wedge and North beaches are the preferred options. Arguably the best waves on the South Coast are to be found at the Bay of Plenty and Snake Park Beach.

>> South African beaches, in particular those in Durban and surround, are not safe after dark…

The N2 freeway leaves Durban and runs south along the famous KwaZulu/Natal South Coast, offering a languid selection of great beaches, including Amanzimtoti, Margate, Ramsgate and many more. Make a point if you can of visiting the Wild Coast.

With white sands and warm sea this is certainly the beach lovers paradise. 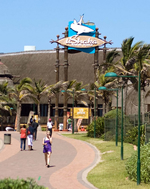 South Africa has a strong Americanesque consumer culture and the associated theme park and mall culture in KwaZulu/Natal is alive and well.

The Gateway Mall on the way out of Durban towards Pietermaritzburg is as impressive as any in the world, and for theme parks look no further than uShaka Marine World which has all the features of the California version.

The Suncoast and Sibaya casinos offer Las Vegas with an African flavor – but only just. The Fitzsimons Snake Park on the lower Marine Parade hosts a comprehensive selection of the many snakes found hereabouts.

All along the South Coast a variety of adrenalin sports are offered as part of day or multi-day packages. The usual fare of diving and snorkeling are easy to arrange while further afield gorge-swings, bungi-jumps and canoeing into any one of the many river inlets that line the coast are just a few of the options available.

The best place to arrange any of these activities is through your hospitality establishment. Any lodge, hotel, guesthouse or backpackers lodge worth its salt will have either a travel shop or an agent for one of a selection of venture outfitters offering these and many other options.

Look out for the handful of community owned adventure outfitters that offer guided tours into the nature preserves of the Wild Coast and humble but very authentic camps and lodges within community areas.

From Durban to the Wild Coast an excellent selection of premier golf courses are available.