Getting between Cape Town and Durban

This is potentially one of the most rewarding overland routes is South Africa, utilizing the famed Garden Route that wends its way along the beautiful seaboard of the Eastern Cape and the South Coast of KwaZulu/Natal. However, if you are in a hurry, then the other options are more prosaic.

Scheduled domestic connection between Cape Town and Durban are offered by all the main carriers, with either a direct flight or connections via Johannesburg and Port Elizabeth. These are:

The cheapest operator for this flight has tended in the past to be kalula.com with SAA being the most expensive. A one way direct connection between Cape Town International Airport and Durban International can range between US$60 at the cheapest to US$130 at the top (economy).

All the main overland and intercity coach and bus services work this route, and some of the best deals are found here. These are the main players:

The distance between Cape Town and Durban is 1272 km, or 790 miles. The coach journey takes about 20 hours with frequent stops en route. Coaches leave at a variety of times during the days, and since this is one of the premier touring routes in South Africa it is definitely worth scheduling your coach trip with as much daylight potential as possible.

Costs vary considerably, but for a direct, one way fare between Cape Town and Durban expect to pay somewhere in between US$50 and US$70.

Baz Bus does the route, but thanks to its nature as a jump-off-jump-on tour bus option, it is not the best available deal on the road, with the price floating above US$100 for this trip. The Baz Bus coaches are also not ideally configured for long journeys, and being a stop/start type of trip it can take a long time.

There is no direct rail link between Cape Town and Durban so a lengthy journey from Cape Town to either Johannesburg or Bloemfontein, and then on to Durban is required. As a consequence travel between these two cities by train is likely to be extended and impractical. However Shosholoza Meyl does offer regular departures each way, and for this trip it is definitely advisable to book a sleeper.

Fares on Shosholoza Meyl vary from month to month, but expect to pay the very reasonable price of between US$60 and US$80 for sleeper class on this trip

Premier Class services are also available for this route, which is a more costly but significantly more comfortable option. This will set you back between US$160 and US$200

As with every route in South Africa with a few exceptions the most rewarding way to travel is independently by road. From Cape Town to Durban the main road route option follows the coast the entire way, moving through the classic Cape backcountry, along the Wild Coast and eventually up the sultry South Coast of KwaZulu Natal. This is known as the Garden Route an dis one of the world’s premier touring destinations. 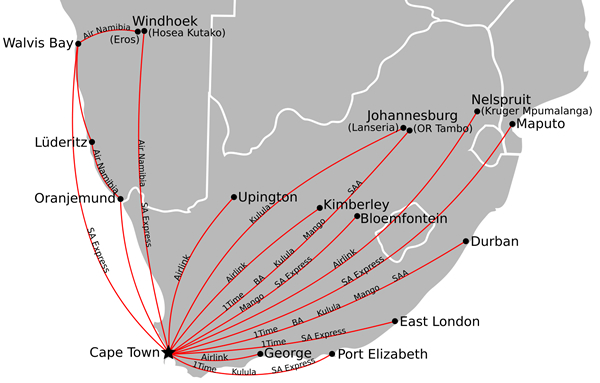