Getting Between Johannesburg and Durban

There is a regular pilgrimage between Johannesburg and Durban that since time immemorial has seen the Vaalies – or residents of the old Transvaal, present day Gauteng – who flood down to the south coast for the annual Christmas holidays. As a consequence this is one of the most heavily plied routes in South Africa, and there are no shortage of options to choose from.

All the leading internal air carriers in South Africa operate regular, non-stop scheduled flights between Johannesburg and Durban. These are:

The cheapest local carrier on this route was recently named as Mango although the other players are in close contention. British Airways is the priciest with South African Airways the runner up. Prices vary among operators between US$70 and US$120 so it pays to shop around.

>>South African Airlink offers a scheduled service to Margate Airport, which is a small domestic terminal adjacentto the South Coast resort of Margate

All the main overland and intercity coach and bus services work this route, and some of the best deals are found here. These are the main players:

The distance between Johannesburg and Durban is 518 km or 322 miles which, although not as long as the Cape Town Johannesburg Route, is still a long journey.

The bus ride either way between Durban and Johannesburg is long and direct with limited rest stops along the way. The journey takes about 8/9 hours and day and overnight services are available

Prices vary between about US$50 and US$80 one way. Deals are available so shop around.

Baz Bus does the route, but thanks to its nature as a jump-off-jump-on tour bus option, it is not the best available deal on the road, with the price floating above US$100 for this trip. The Baz Bus coaches are also not ideally configured for long journeys, and being a stop/start type of trip it can take a long time.

The cheapest option for the Johannesburg/Durban Route is the Shosholoza Meyl intercity with consistently reasonably prices hovering at below US$20 for a one way economy ride. This is hard economy to beat.

Car hire remains the optimum way to travel in South Africa, and the road between Johannesburg and Durban follows the Midlands Meander route which is one of the loveliest road touring destinations in the world. En route you will find the Drakensberg and the Zululand Valley of a 1000 Hills. The area is filled with designer restaurants, lodges, small hotels and guest houses 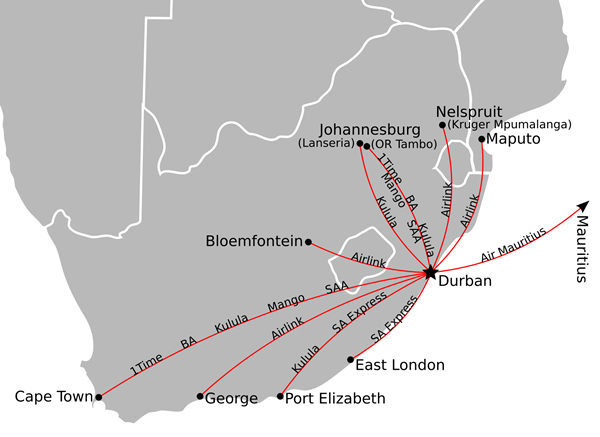