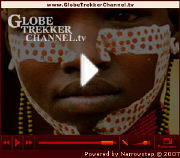 Many of us who love to travel also love to fill the gaps in between trips with some travel shows on TV. If you are a proud TV owner you probably already know about the Globe Trekker series, which has been the leader in TV travel shows since they debuted in 1994 as the Lonely Planet show. A few years ago they changed the show’s name to Globe Trekker in some places and Pilot Guides in others, but the format is still the same and Ian Wright, Megan McCormick, and Justine Shapiro are still presenting and making new episodes each year.

You can now watch one of the Globe Trekker South Africa episodes right on your home computer on your own schedule. They have just launched the GlobeTrekkerChannel and much of their catalogue is already available, with new shows being added regularly. First you sign in to the GlobeTrekkerChannel site, then you buy credits and begin watching. Once you choose a show you can watch it an unlimited number of times for the next seven days.

Their second South Africa show is already available, where they start in Cape Town before going to Robben Island, Stellenbosch, Kimberly, Durban, Thohoyandou, Kruger National Park, ending up in Johannesburg. In addition to the Globe Trekker series there are also other adventure shows available, and even Planet Food. You can also download the theme music to your mobile device as well as get recipes from Planet Food. There are free interviews with the main presenters so you can check those out before you decide.