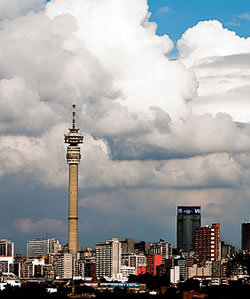 Johannesburg, or Joburg as she is better known, is a large cosmopolitan city like no other in Africa. The site was originally a farmstead that erupted into rapid growth upon the discovery of vast gold deposits in the adjacent Witwatersrand in 1886. Joburg remained for a long time a goldrush town, and some would say it still is.

Johannesburg is part of Gauteng Province, a region that forms the economic heartland of South Africa and can sometimes seem like nothing more than a vast wealth generating machine.

Underneath that exterior, however, Joburg is an exciting cultural and historic destination with much for the casual visitor to see and do.

Explore the history of the struggle…

A first stop for many travelers arriving in Johannesburg is usually the Apartheid Museum which is definitely a must-see for any visitor with any interest in the bitter race history of South Africa. This is a muted monument that pays tribute to the long struggle in this country for racial equality. A visit to the museum is best arranged through your hospitality provider, and is offered as an option by all of the many local tour outfitters working the lodge and hostel circuits of Johannesburg.

A trip to the Apartheid Museum is often complimented by a less sober but no less instructive visit to Soweto, the most densely populated human conurbation in South Africa. This also is one of the principal heartlands of the struggle, but also home to some of the most vibrant images of black urban society in South Africa. A little canned these days, but well worth a visit.

Johannesburg has a compact selection of museums and art galleries besides the Apartheid Museum, including the Mandela Family Museum, the South African National Museum of Military History and the Origins Center, a museum of South African rock art.

More contemporary South African art is shown at a number of art galleries, including the Johannesburg Art Gallery and the Standard Bank Gallery.

Johannesburg is the shopping center of Africa…

It often comes as a surprise to visitors to find that Johannesburg is a vast consumer mecca with ten fully appointed malls and countless smaller shopping centers. Shoppers from all over the continent flock to Johannesburg to stock up on consumer goods.

Look out in particular for the Sandton City, Eastgate and Rosebank malls, and for a taste of the strong South African Indian influence visit the Oriental Plaza where stiff bargaining is not only possible but expected.

For local arts & craft visit the African Craft Market at Rosebank Mall and the Mai Mai flea market cnr Anderson and Berea Sts, the oldest in Johannesburg, where authentic herbalists and traditional healers trade their goods and services.

Apart from the traditional South African barbecue, or braai, don’t expect much of a unique Joburg flavor in any of the local restaurants. Franchises predominate with American style burger and steak outlets being the favorite.

However Johannesburg does have a very sophisticated underbelly despite it’s outward appearance, and a very wide selection of restaurants offering a high standard cosmopolitan cuisine can be found in many of the up-market neighborhoods of Johannesburg.

As with everywhere in South Africa, in Johannesburg Indian restaurants not only proliferate but are also among some of the best in the world.

Other sights and sounds of the big city…

Gold Reef City is a local theme park/casino hotel complex that is good for a fun day out although it is not up to Disneyland standards. It does however offer a few insights into the mining history of the city and will fill a few vacant hours if you find you have some.

Johannesburg township dance and music culture evolved as an artistic protest against racism and apartheid. It has now become part of mainstream South African culture and is showcased in many venues around the city. Check out the many music venues around Johannesburg.

Johannesburg has rolled out a new Bus Rapid Transport system called Reya Vaya which will comprehensively serve Johannesburg during and after the Fifa World Cup soccer tournament. Check out the website for routes.

Meanwhile the older metrobus system is in operation, as is the metrorail, both of which will be upgrading for 2010.

>> Remember that Johannesburg and South Africa in general is a very high crime region. Exercise caution at all times and take advice before you set off…