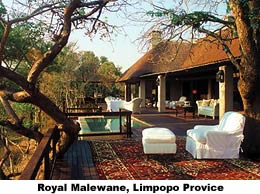 A signature feature of African travel is the concept of luxury wilderness and game lodges. This approach to touching the wild in Africa is usually not for the faint of pocket, but in exchange for this a high degree of exclusivity can be expected, coupled with the work of celebrated interior designers, and the attentions of accomplished hospitality professionals against a backdrop of one extensive private wildlife reserve or another. There are certain destinations that are better at this than others, but arguably the crème de la crème of luxury wilderness hospitality establishments anywhere on the continent are currently to be found along the Botswana/South Africa/Mozambique axis.

Touch the Wild in Style

In the area of the Kruger National Park, for example, there are some two dozen high profile game lodges clustered on the fringes of the main reserve. The usual fare of game walks, bird watching, relaxation and Haute Cuisine can be selectively combined with spa facilities, aroma therapy, health & wellness, and a variety of sporting options, all within, against or upon the raw bushveld that defines the region; and all feeding easily into the vast facility of Kruger National Park itself. In KwaZulu/Natal, associated with the St. Lucia (iSimangaliso) Wetland Park and the Hluhluwe National Park is the themed Hluhluwe River Lodge, and further north the superb Pinda Lodge situated on a 22 000 acre private conservation area in the Maputaland region, and also associated with the greater St Lucia Wetlands reserve. 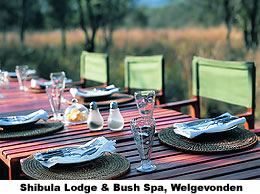 A Variety of Themes

The same basic concept carries through throughout the various provinces and regions of South Africa where this principal is applied. The differences exist broadly along the lines of pure bush/savanna themed establishments in the lowveld block of the country, that soften slightly as the eastern and southern approaches tend more towards the high culture associated with the Cape, and the ‘California Dreaming’ sensibility of Durban and the KwaZulu/Natal South Coast. In the eastern Cape the award winning Shamwari private game reserve, 25 000 acres of superb subtropical bushveld habitat, offers a superb variety of accommodation and associated game viewing and wilderness adventures. From a colonial style manor to isolated tented camps, and situated as a natural extension to the Garden Route between Port Elizabeth and Grahamstown, it could hardly be more accessible.

Almost invariably, attached to these wonderful conservation facilities, are a staff motivated by nature, and in particular by it’s protection, who act as guides and mentors in the discovery of African wildlife. A very high degree of expertise can be expected on the game walks and drives, and the bird watching excursions that make up so much of the game lodge experience. This is where a lot of the high cost of enjoying the facilities is justified , and certainly without establishments such as these the diversity and proliferation of wildlife in South Africa would be significantly less. 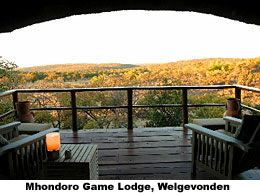 Moving west, meanwhile, and spreading from East London more or less to metropolitan Cape Town itself, the emphasis is increasingly focused on local cuisine – which is regionally quite varied, and within itself very distinctive – and which is naturally complemented by the rich diversity of wines that are grown locally, and that enjoy an enviable international reputation. Combined with this are a variety of spas and alternative therapies, and access to perhaps some of the finest golf courses in the world. There often remains, of course, a strong emphasis on game and wildlife viewing, for there are many celebrated facilities, such as Shamwari itself, and the Addo Elephant Park, along the celebrated coastal Garden Route from Durban to the Cape. The texture of the Cape landscape itself differs from the raw and unadulterated heat and dust of the north and northwest, and although undeniably rugged, and unquestionably African, it tends to be softer and cooler, with a more noticeable floral diversity as it bleeds slowly into the signature forest and fynbos ecology of the Cape .

Along the length of the Cape coastline, and inland along the Wine Route, a rich variety of stylish accommodation options abound. From simple bed and breakfast establishments, to country homes of sophistication and grandeur, the increasingly green and amiable climate of the Cape, with its splendid backdrops of wine country and berg, opens out for the enjoyment of the discerning traveler. It is to the benefit of the consumer that each establishment tends to outdo the last in terms of luxury, sensitivity and integrated and highly themed architecture. It is not inconceivable at times that the fundamental reason for being there – the superb expanse of nature, and the diversity of wildlife within it – can fade into a degree of irrelevance by just being surrounded by so much care, attention and understated splendor. 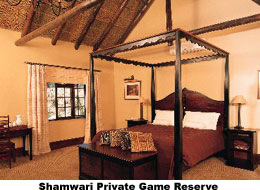 The Future of African Nature Conservation

This, however, is very much part of the contemporary African experience, and it is an area of travel within which South Africa in particular excels. There are few parts of Africa where large scale conservation landholdings remain in private hands, and for better or for worse, and with a strong commercial/philanthropic element, this in some ways represents the future of conservation in Africa. Prices vary widely, but expect to pay anything up to US$1000.00 per night for the premier locations, and upwards of US$200.00 for the cheaper.

There are plenty of examples of how not to proceed in regard to wildlife conservation, and the haphazard land redistribution program in Zimbabwe is without doubt one of these. A similar structure of private conservancies with enviable tourist facilities have in recent years been seized by the envious, with the result that rampant hunting and senseless exploitation have rendered the entire tourist industry, and the once rich diversity of wildlife in that country, a wasteland. If, therefore, one questions the high cost and exclusivity of this type of indulgence in wild nature, then one merely has to ponder the alternatives.