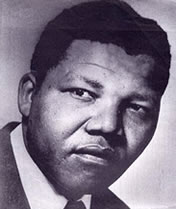 The battle for the position of grand elder statesman on the African continent was won several years ago by Nelson Mandela. The competition was stiff, for the moral gravity of the anti-apartheid struggle was bound to produce a crop of men of towering stature, tempered by the fire of The Struggle, and burnished by extraordinary, almost obsessive global adulation. If Steve Biko had lived would he have been one of these? No doubt. Biko had a Ché Guevara type iconoclasm that would have been a perfect counterbalance to the determined pacifism of Mandela. However once the bloodletting had passed, it was Mandela alone who emerged as the survivor, and who walked away with the laurels.

One who never will, never could have, but wanted that crown oh so badly is Zimbabwe’s deeply discredited president Robert Mugabe. Arguably Mugabe was the one person on the planet who took no pleasure at seeing Nelson Mandela walk out of Victor Verster Prison a free man in February 1990. Gone in a flash at the that moment was the role of leader of the Frontline States, a grouping of nations bordering South Africa that was succoured by the anti-apartheid struggle. Gone also was the role of leading spokesman for the ant-colonial struggle, for with Mandela’s release that struggle ended, and gone also was the role of most respected black statesman on the continent, for that position was instantly filled by Mandela himself. It just goes to show how capricious life can be, and moreover that it is not always the undeserving that achieve the greatness that they do not deserve.

Nelson Mandela’s 90th birthday will be celebrated later this month, and understandably the event is of global significance, and will once again plunge South Africa under the world spotlight. An examination of Nelson Mandela, what he stands for, what he stood for, and the promise that he delivers is one of the few satisfying experiences in a nation, and a world, struggling to define the goals of the coming millennium. The simplicity of his message – peace, harmony and forgiveness – is not a new one, but it carries significant ballast , since Mandela more than most has much to forgive, and if he can do it, then anybody can.

And if the world is watching closely, then watching more closely still is Africa. From Rwanda to Sierra Leone, from Liberia to Uganda, the flowers of peace, humanity and co-existence seem to have taken root in many parts of Africa, and although at times it seems to be a matter of one step forward and two steps back, and although the scars sometimes seem too deep to ever heal, with one like Madiba at the helm, the odds on recovery are high.