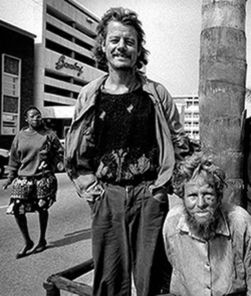 South Africa’s poor white problem is starting to raise a sizeable blip on the nation’s social radar again some 70 years after racially divisive (apartheid) policies had been put in place to end what was then a symbol Afrikaaner embarrassment. That poverty stricken whites, and a sizeable number of them, should again re-emerge in a re-shaped country of mostly wealthy whites and poor blacks is particularly interesting.

It is the dramatic socio-economic changes witnessed in South Africa since the end of white rule in 1994 that have resulted in this ironic turnaround in civil society, as the previously disadvantage black majority population now move into positions previously held by politically protected whites. This is none more evident than in the turnaround of fortunes amongst South Africa’s white Afrikaans-speaking population.

Descendants from mainly Holland, Germany and France, this white tribe had lived a frontier-type existence outside of mainstream politics and centralized economics since the mid-17th century, before finally securing a political foothold in the country in the first half of the 20th century. This foothold was eventually to be the conduit through which Afrikaaner freedom from poverty was to be gained.

Government policies since 1948 were formalized, racially divisive, and geared at bringing the poor Afrikaaner whites of the time into civil service and other government-related occupations in a tacit exchange for political support. The result was a gradual but successful upliftment of the Afrikaaner people, culminating in a state or quasi-state workforce of over 650,000 at its peak, representing approximately two in five employable Afrikaaners.

Educational requirements for these government positions were at the time minimal, while perks including subsidized housing, health and pension contributions complemented basic salaries to allow for a reasonably comfortable lifestyle. These employees were protected from competition from the nation’s majority of blacks through loyalty to the conservative National Party of the time coupled with a range of legislation further protecting their employment and securing their services through to retirement.

But with the change in political power in 1994 came near total switch in the South African civil service employee profile, as newly enfranchised black employees gradually replaced the hundreds of thousands of mostly Afrikaaner employees in positions previously controlled by the state. These employment positions were far and wide and ranged from ports and railways to postal and telecommunications services, in addition of course to the maze of bureaucratic positions created by nearly 50 years of cozy Afrikaaner government brotherhood.

This changing of the guard was implemented mainly by the new African National Congress (ANC)-dominated government and accepted by Afrikaaner employees mainly through a program of friendly retrenchment packages. But while these packages may have seemed attractive at the time, poor financial management, rising inflation, spectacular jumps in high cost items such as housing, and the general lack of skills and education eroded these financial packages in double quick time as incomes disappeared.

The net result is an ever increasing community of poor white South Africans, predominantly Afrikaans, and predominantly former government or semi-government employees in one form or another, living in conditions previously the reserve of poor blacks.

Statistically, unemployment amongst white South Africans has doubled since the end of apartheid, with around 450,000 (equivalent to 10% of the white population of 4.5 million) deemed too poor to live in traditionally white working and middle class areas. Around 300,000 of these are Afrikaaners (again, equivalent to about 10% of the Afrikaaner population of around 3 million).

Of course, the central political theme of South Africa’s new, non-racial government has been programs aimed at the eradication of black poverty and with it the social upliftment of the country’s near 40 million blacks, probably half of which can be defined as poor. In an almost mirror reversal of apartheid’s socio-economic policies, current black economic empowerment legislation is exactly that, empowerment for blacks, with little room for the re-empowerment of poor whites.

The result is that most of the country’s poor whites now feel they have been overlooked by the state and not afforded an equal opportunity to compete for government-paid jobs. Increasingly, they are being forced into white squatter encampments on the periphery of the country’s cities and towns where accommodation is cheap but opportunity minimal. This ironically was the keystone of previous Afrikaaner socio-political strategy, which while although forced through legislation, was geared at preventing blacks partaking on an even keel in white civil society.

This irony is clearly not lost on this group of poor whites, which according to social and human rights watchers is increasing at around 15% per year. Compounding this ironic turnaround of fortunes was a visit to one of these poor communities this week by ANC president and South Africa’s most likely next president, Jacob Zuma.

Speaking to a gathering of about 200 poor and bedraggled white Afrikaaners encamped on the outskirts of the country’s capital of Pretoria, the former stronghold of Afrikaanerdom, Zuma said he was concerned by their plight and would continue to engage with them on matters of social and economic upliftment.

While those words were seen as little comfort for some, the gesture was far greater than these self same people offered Zuma and his flock when the roles were reversed. But while they may be poor, these whites still have access to South Africa’s welfare system which, while meager in its offerings, is nonetheless sufficient to keep 10 million mostly poor, mostly black recipients in with a fighting chance.