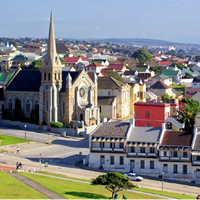 Port Elizabeth, or PE as it is more widely known, is South Africa’s fifth largest city and touted as the nation’s watersport capital. It enjoys a singular advantage over Cape Town in this regard. The city is situated on the Indian Ocean and not the Atlantic, nor the turbulent merger of the two which tends to make Cape Town weather and sea conditions so unpredictable.

The waters of Port Elizabeth’s Algoa Bay are usually warm and calm year-round, with the perpetual winds that give the city its other name, The Windy City, helping to making the local beaches ideal for wave sports, sail surfing and wind surfing.

For those less inclined towards sand and surf, however, PE is also situated along the leading edge of the Garden Route which offers a wide variety of typical Eastern Cape sights, sounds and activities for the casual visitor.

If you can tear yourself away from beaches PE offers a modest but authentic collection of museums and monuments illustrating the part the community played in the early European settlement of the region and its later role in the evolving race history of South Africa.

Among these is the South African Air Force Museum which offers an interesting insight into South Africa’s involvement in the First and Second World War air conflicts. Make a point also of checking out the PE version of the Johannesburg Apartheid Museum. The Red Location Museum also examines the local apartheid history, but makes some changes to the usual museum concept and layout. For a different slant on history altogether visit the No. 7 Castle Hill Museum, the oldest settler cottage in PE.

The Nelson Mandela Metropolitan Art Museum, as the name implies, presents a selection of traditional and contemporary art displays drawn specifically from the Eastern Cape.

Port Elizabeth lies a little too far east to be linked into the mainstream South African wine industry, but it is still very much part of the Cape region. However in any of the many excellent hostelries and restaurants scattered across this part of the Eastern Cape local wines are collected and served with pride.

Expect excellent seafood to compliment this wherever you go. Being in the general proximity of both the Atlantic seafood traditions of the Cape and the warm water flavors of KwaZulu Natal, PE is placed ideally to offer excellent varieties and presentations of both.

Expect also all the usual South African franchise outlets, but don’t miss the many small restaurants offering a diverse fare of local and cosmopolitan cuisine.

Algoa Bay which sweeps eastwards from the centre of PE offers more than 30 miles of superb beaches. Water temperatures are mild year round and sea conditions are generally calm in the bay. This is one of the best sailing venues in the world and a magnet for all kinds of beach and water-sport.

The southern beaches tend to offer safe and sheltered swimming conditions with good waves and surfing prospects. The northern beaches present a picture of lonely stretches of sand dunes and surf with great walking potential. You can also find excellent surf fishing locations all along the coast.

All the beaches in Algoa Bay are swimmer and surf friendly.

Check out the Algoa Bay Yacht Club for great seafood and maritime culture as well as charters and sail opportunities.

PE Has a great selection of dive venues and commercial dives are available and arranged easily through your lodge or hotel. The coral sections are well preserved but limited in scope, with wreck diving the most popular option. Of course spear fishing is available for those with a taste for it.

Check out a few adventure alternatives

Dune sports are a popular diversion in and around PE with the local Maitland Dune Mountain a popular spot for sand boarding.

The local chapter of the Mountain Club of South Africa offers a variety of hikes and trails in the surrounding countryside.

The Eastern Cape Wilderness Motorcycle Tour is a unique way to explore the beautiful landscapes around PE.

General activities in and around Port Elizabeth

Adjacent to Port Elizabeth is the famous Addo Elephant National Park that is one of South Africa’s premier eco-destinations. A variety of other smaller national parks and preserves, including Kragga Kamma Game Park, are available as day or overnight trips from PE itself.

Whale watching and game fishing charters are easily arranged through your hospitality provider.

Apple Express is a 100 km narrow gauge classic steam trip with a stop on the Van Stadens River Bridge.

Nothing can beat hiring a car and getting out on the open road to explore the countryside around PE which offers signature Eastern Cape scenery, a selection of wilderness preserves and a variety of lodges, spas, hotel resorts and independent restaurant. This is one of the world’s premier road touring destination so take an independent stand and get out there…..