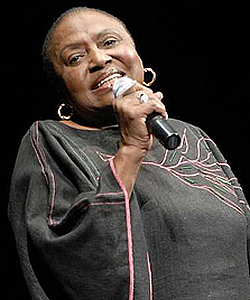 Among the Zulu people of South Africa, upon the death of a monarch, it would be said that the ‘Mountain has Fallen’. Well Miriam Makeba was not Zulu, but Xhosa, but she was also a pan-Africanist, and this weekend the mountain fell. After her last concert performed in Italy on 9 November 2008 the great South African singer and freedom activist passed away at aged 76.

Miriam Makeba’s life spanned the militant phase of the anti-Apartheid struggle between the 1950s and the 1990s. Known as ‘Mama Africa’, her voice rose to prominence in the 1960s and carried through the darkest days, to be heard on her native soil only after independence in 1994. She was a singer and African music ambassador first, but no less a powerful influence in the anti-apartheid movement and the US civil rights stage of 1960s. Alongside her husband Hugh Masekela, and others such as Harry Belafonte, she was one of the founding pioneers of world music as a global phenomenon.

Makeba was born in Johannesburg in 1932, and in the 1950s began her professional music career as a singer with the South African Afro-jazz/do-wop ensemble the Manhattan Brothers, before later forming her own group that she called the Skylarks.

She came to international attention as a member of the touring cast of the South African musical King Kong, performing alongside Hugh Masekela in the United States. Shortly afterwards she was driven into exile when her passport was revoked by the South African government after her appearance in an anti-Apartheid film, Come Back, Africa, a fictional production with sequences shot at the now famous black suburb of Sophiatown.

In 1966 Miriam Makeba became the first African woman to win a Grammy.

Two years later she pinned her colors to the mast and married Trinidad born civil rights activist and Black Panther member Stokely Carmichael. Soon afterwards the couple moved to Guinea where Carmichael became an aid to Guinean President Ahmed Sékou Touré and Makeba the African nation’s official delegate to the United Nations. In 1985 she moved to Brussels where she lived until her return to South Africa in 1990.

Miriam Makeba’s music flowed through the popular jazz fusion styles of the era while always maintaining the strong quintessence that has become over the last fifty years arguably the most recognizable style and form of African music. This was typified by her legendary delivery of Xhosa language classic ‘The Click Song‘. It was an irony that has long been factor of black music that her powerful voice and extraordinary stage delivery enthralled white audiences but could not effect the social and political crossover that would only come in the autumn of her life. South Africa and the world has lost an iconic presence, and one of the pillars of the anti-apartheid struggle. She has joined many others in posterity where she will occupy a place of unique importance in South African history.