South Africa is a member of the Commonwealth family, a stem from the root of European colonial expansion, and as a consequence the nation is closely aligned with others such as Australia, New Zealand, Canada, and more distantly, the United States. What differs in the case of South Africa is that the indigenous races did not succumb to the genocide of alcohol, displacement, disease and social engineering as they did eslewhere. Therefore the white tribe of South Africa was forced to share it’s cultural landscape with blacks, reluctantly initially, but more generously as time went on, until today it is more a case of blacks sharing their cultural landscape with whites, and that, as many would agree, is as it should be. 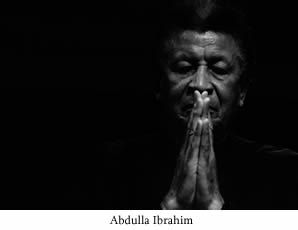 The result has been the growth of a wonderful mélange of different sounds and rhythms, of expressions, sentiments, styles and methods that are replicated nowhere else on earth.

The basic categories of black, white, Asian and coloured music have over the years splintered and diversified, with each at times lending and borrowing from the other, resulting in a multitude of overlapping influences.

This has thrown up some very peculiar concepts, such as the irrepressible 1970s musical Ipi Tombi, the Soweto String Quartet, Juluka, the Drakensberg Boys Choir, and such Afro jazz giants as Hugh Masekela, Dollar Brand and Kippie Moeketsi.

Black music in its many forms is by far the largest and most defining sector of the South African music industry. From its beginnings in the early 1920s under the tutelage of legendary recording executive Eric Gallo, who pioneered the first South African recording company Gallo Records, it has progressed far. Through the 1960s and 1970s it steadily evolved from the early and illicit township styles of marabi, to marabi/swing, African jazz and to the many infectious brands of township jive that are still immensely popular today.

One of the principal figures to emerge out this fledgling South African recording industry, and a name that still in many ways defines South African music, is the Aretha Franklin of the South African scene, and an evergreen favourite, Grammy Award winning vocalist Miriam Makeba. Makeba’s iconic Qongqothwane proved so difficult for whites to pronounce that the song became universally known as the Click Song, and achieved immortality thus. It, and many others like it, proved to be a cultural bridge of sorts that could reduce to tears many whites who would never in the 1960s have considered entertaining a black man or woman in their homes.

Others like Brenda Fasi and Yvonne Chaka Chaka have followed in this tradition, while other famous female ensembles, such as the MaHotella Queens, and many others styled along the same lines, still tend to define the energetic township styles of Jive, or Mgqashiyo, that remain perhaps the most widely recognisable of South African musical exports. 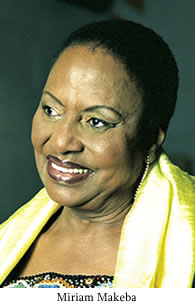 Parallel streams of very different black and coloured South African music styles where emerging alongside this, principally the Pennywhistle Jive and acappella, that, although developed from similar roots, grew in divergent directions.

The pennywhistle style, a strident and highly melodic use of a very simple instrument, was born of the lonely hours spent on the veld by cattle herders who passed the time playing a simple three holed reed flute. This instrument was easily adapted in the towns and cities to a six holed, commercially available variant that within a very short time gave birth to the forerunner of the famous kwela style.

Acappella, or Isicathamiya, emerged from the traditional, and particularly Zulu style of an individual voice leading a harmony that was itself an overspill of the old fireside oral style of storytelling.

It is within traditional Zulu voice that this style has tended to remain, and it is a sound and tempo that still resonates throughout Africa, and arguably forms the basis of most current international African popular music. The most famous proponents of this style were, and remain, the Ladysmith Black Mambazo who achieved international acclaim in the late 1980s after their collaboration with Paul Simon on his defining album and international tour Graceland.

The sweetly melodic and almost deferential mood of South African acappella cannot be further removed the sounds of the militant 1980s and 1990s. Prophets of Da City, a Cape Town rap crew superficially indiscernible from the original African/American template, are credited with the rise of a uniquely local music style called kwaito. With all the recognisable pillars of rap, kwaito is defined by a loud and proud Joburg ‘tude that cannot be genuinely replicated anywhere else.

Around, within and alongside this runs a parallel plunge into ultra-modernism on the part of the white South African music. Many, if not most of the South African music festivals, notably Splashy Fen, lean heavily on this genre, even though it cannot by definition command a lion’s share of the market.

Despite this white South African popular music enjoys a respectable pedigree that was pioneered in the 1970s by such iconic ascents as Rabbitt, Trevor Rabin’s power ballad/rock outfit that gave South Africa its first genuine pop group. Rabbitt was indeed the first thoroughly local band to have girls shrieking louder than the Marshall stack and being carried off stage left in a swoon by paramedics. 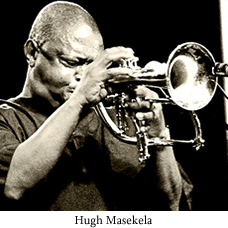 Rabin went on to wield an axe for supergroup Yes, after which he settled into a Hollywood career as an award winning movie score composer.

In the wake of Rabbitt a surge of local pop and bubblegum acts followed. These, like Jodi Wayne, Jessica Jones, Four Jacks & A Jill, Gwenyth Ashley Robin and a gamut of others, clogged the local airwaves of Springbok Radio, and the 1970s pirate radio station LM Radio that beamed out of Lourenço Marques in Mozambique.

This tradition has continued, and South Africa now enjoys a solid repertoire of good white and mixed bands pushing out a regular output of rock, alternative, folk and fusion styles, all of which are very easy to locate on the local music circuit, and are usually at venues a lot more accessible to casual visitors to South Africa than mainstream black music.

South African jazz has been led for more than a generation by arguably South Africa’s most influential music heavyweight. Jazz trumpeter, composer and singer Hugh Masekela’s career began in the late 1950s alongside fellow jazz virtuoso and pianist Abdulla Ibrahim. And through 40 years of prolific output and manifold collaborations, and after some 20 recorded albums, Masekela is still regarded as among the finest jazz practitioners in the world, and without doubt South Africa’s most gifted son.

In his wake have followed many imitators, but also many originals who have helped define South African Jazz as a thoroughly home grown product. South African jazz is now represented around the country in many festivals and events, and in niche markets where a number of different races and groups have infused their own identity on this evergreen medium.

Occupying nowadays something of a sub-strata is Afrikaans music, which, notwithstanding a limited market, is well represented by progressive rock influenced acts along the lines of the ubiquitous Steve Hofmeyr, and a somewhat bizarre but undeniably competent Afrikaans language punk outfit called Fokofpolisiekar, or Fuck Off Police Car. Bringing up the rear are countless feel-good, humorous and sentimental pub rock outfits for whom an enduring market seems to exist.

This music is never likely to breach the big time, but since independence in 1994 it has shed many of the stifling conventions of the apartheid period, and a surprising diversity of styles and artists have breathed new life into what always tended to be a rather conservative genre determined at all costs to fight evolution. 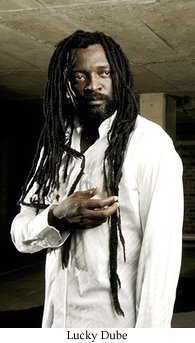 The last word must go to the South African reggae superstar Lucky Dube, a product of the 1980s and 1990s explosion of black protest, and steeped in the venerable traditions of Bob Marley and Jimmy Cliff.

Lucky Dube was a renaissance man, prolific in many styles, and a symbol of the new South Africa. His symbolism, however, ran deeper than even he would have cared to follow when he was gunned down in 2007 in a senseless carjacking that had about it all the hallmarks of South Africa’s bizarre and violent psychosis.

Lucky Dube’s death alerted many to a crisis underway in South African society, and to his millions of fans that was all the good that could be said of the matter. Rest in peace Lucky Dube.

Included in this post are just a handful of the great names that have gone to imprint South African Music on the wider world in a way that far exceeds it’s market share. For the visitor to South Africa a trip down to a local music outlet will open up a whole world of wonderful sounds and rhythms that are an integral part of undertstanding any nation with the cultural diversity of South Africa. If any readers wish to add a name to the list that you think specifically deserves mention, then drop me a line and and I would be glad to slip in an inclusion.