South Africa does not have a wealth of cuisine that you could compare with the great cooking nations of the world, but we do have a few traditional favourites, although it seems, most are borrowed from somewhere else.

The humble bobotie (derived from the Indonesian Bobotok) is a baked meat dish, usually beef, but pork or lamb can be used. It is baked like a lasagne or shepherds pie, but with whipped milky egg mixture on top. In 1954 it was declared the national dish of South Africa, by the United Nations Women’s Organisation. 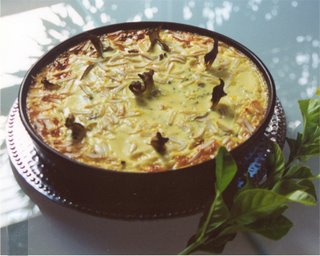 As with many South African dishes there is a sweet component added in the form of dried apricots/raisins/sultanas and since this is derived from our Malay brethren a little curry powder is never far away.
Spices used vary greatly from recipe to recipe, but usually include coriander, bay leaves, turmeric, cloves and cumin. Many recipies also call for the addition of bread added into the initial mince mixture.
In true Indonesian style bobotie is served with Geel rys (yellow rice) and lashings of blatjang (chutney).

Give it a whirl at home and see if you can recreate a little bit of South Africa that we stole from Malaysia or thereabouts.

Method
Preheat the oven to 180C/gas 4. Heat the butter in a saucepan and cook the onions until soft. Set aside.
Heat a large frying pan over a high heat and fry the beef, without oil, until golden brown. Remove from the heat and add the onions together with all the other ingredients except the milk and eggs. Mix well and put into 4 x 300ml ovenproof bowls or a large ovenproof dish. Press the mixture down with the back of a spoon.
Beat the milk and eggs together lightly and pour over the mince mixture. Bake for 20–25 minutes for small boboties (and 30–40 minutes for a large one) or until the topping has set and is golden brown.