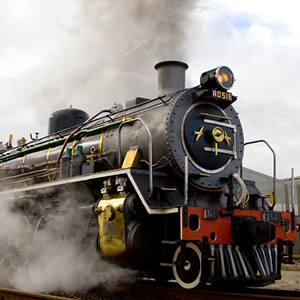 South Africa is a highly functional and sophisticated society, and this is reflected in its rail services.

Comprehensive urban and inter-city networks exists and all the main centers hosting matches in the upcoming Fifa 2010 World Cup tournament will be linked by some level of passenger rail services.

The South African rail system is publicly owned with a variety of different operating services.

South Africa urban rail has never had a good reputation

Rail travel in South Africa, with a few exceptions, has tended in the past to be the preserve of the masses, with very little in the way of safe and reliable services to tourists and the motorcar commuting public as a whole.

This began to change a little with the advent of majority rule in 1994, and will change far more radically as a consequence of the Fifa World Cup Tournament to be staged in South Africa in 2010.

Metrorail is an urban commuter rail system that has been in existence in one form or another in South Africa for many years and has tended to be better in some urban centres than others. The system has of late suffered a diminishing reputation thanks to generally poor standards of safety and reliability, coupled with the added stress of high crime within the system.

Significant time, effort and investment is being put into the system to upgrade it for use during the 2010 World Cup, which in future, if the momentum can be maintained, will be a boom for South Africa generally.

The Metrorail system has traditionally been most functional in Cape Town and surrounds, Durban and the South Coast, but it is currently being upgraded to service airports and the main urban sports and tourist facilities countrywide. This will be an excellent means of close urban touring and, thanks to tight policing, should during the period of the World Cup period at least be safe.

The most notable infrastructural development prompted by the World Cup has been the construction of the Gautrain. This will be yet another showpiece of African urban development peculiar to South Africa, and will in essence provide a mass transit link between the two principal cities of Pretoria and Johannesburg and the main transport hub of Oliver Tambo International Airport that serves them.

Gautrain will be the first truly accessible commuter transit system with the potential to relieve car traffic on the massive Ben Shoeman Highway between Johannesburg, Pretoria and the Midrand, and will contribute significantly to the expected movement of large numbers of tourists concentrated in the region in the run up and during the World Cup Tournament.

Gautrain have released no figures yet for fares and pricing, but it does make the point that this will be lower than a comparable car journey. An automatic ticketing system will be in place that will allow for day, week and monthly passes.

The rolling stock system to be used will be the Bombardier Transport’s Electrostar, a train commonly seen in the south of England.

The main centers of Johannesburg, Cape Town and Durban offer a comprehensive and very reliable inter-city railway system. The smaller centers will be connected by rail, but neither as regularly or as comprehensively. Port Elizabeth cannot be accessed directly from Cape Town, and both Rustenburg and Polokwane are connected via Johannesburg.

This is one of the top three world rail travel experiences, which traces either the famed Garden Route or more directly through the Karoo between Pretoria and Cape Town.

Forget trying to get from A to B on the Blue Train. This is an experience unto itself, and with a single berth costing upwards of US$1500, this is certainly train travel par excellence.

This is again probably something to do for the experience rather than for practical transport. At a cost of between US$100 and US$200 per person the Spoornet Premier Services is not cheap as train trips go, but being an overnighter, full berth and bedding are available, as well as meals.

Spoornet also operate a long distance passenger system that has been labeled as the best kept secret of a generally travel friendly country. This makes use of the same basic rail system as the Blue Train, and of course passes through the same selective countryside, but it is a great deal more social and affordable.

Shosholosa is a lovely word in the idiomatic African tradition of language, and is suggestive by its enunciation of steam train travel, evokes memories of mass migrant labor transit, and means literally Make room up ahead, or Make way for the next man…

The system offers a semi-luxury class, a tourist class, and various basic sitter and third class options. The cost on average is under US$100 for a bed in a 2 or 4 bunk sleeper. The Tourist Class option offers comfortable berths and a dining car, all served to a reasonably high standard.

>>Expect to pay between US$25 and US$60 depending on class and destination, which makes this a highly affordable option

>>Warning: Downtown train stations are rarely situated in safe or upscale neighbourhoods. Always take a taxi or escorted transport to catch a train. Never set off on foot.

Look out also for the Outeniqua-Choo-Tjoe…

This is the last continuously operating steam commuter train in South Africa. Operating between George and Mossel Bay in the Cape, it is a tourist attraction these days, but still proudly working a scheduled service.

As a consequence train travel is designed a to be affordable to a low earning population. However even luxury and premier class fares are cheaper than comparable airfares, so train travel makes a lot of sense.Shosholoza Meyl services during the world cup will be discounted and packaged, so prior bookings and a little bit of research will definitely save you some money. 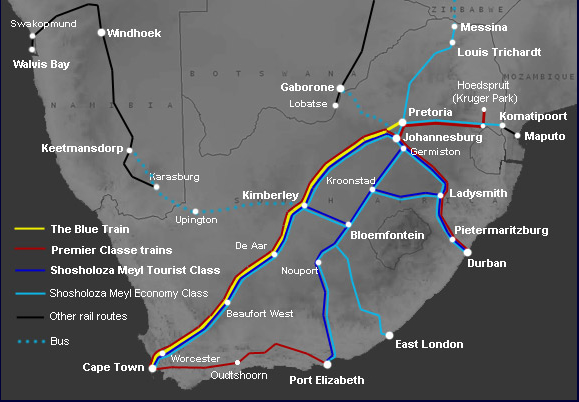