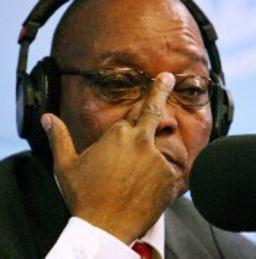 Usually, (by international standards) corruption, rape and indecency charges invariably mark the end of a politicians career.  In SA we like to do things a little differently and get all that under our belt before becoming president.

Ex-deputy president Jacob Zuma has hardly spent a weekend out of the courtrooms and newspapers in the last 6 months due to Arms deal scandals, rape accusations, singing songs about machine guns and generally scaring the hell out of everyone.

All this has done nothing to waiver his support amongst his huge fan base and if anything it has grown! he too seems to command the majority of the 4000 ANC delegates, which is what decides the next head of the ANC vis-à-vis South Africa.

Thabo Mbeki seems to be pulling all of his numerous strings to avoid this calamity, even to the extent of trying to rewrite the constitution allowing him a 3rd term in office, which is the lesser of the two evils in my opinion.

Who has already been implicated in “Oilgate”, “Travelgate” and made famous by declaring South Africa could learn about land reform from Zimbabwe…

The last option stands in the form of Mr Tokyo Sexwale a sharp and successful businesmen and self made rich-person, whom in my mind would be the best option for the following reasons.